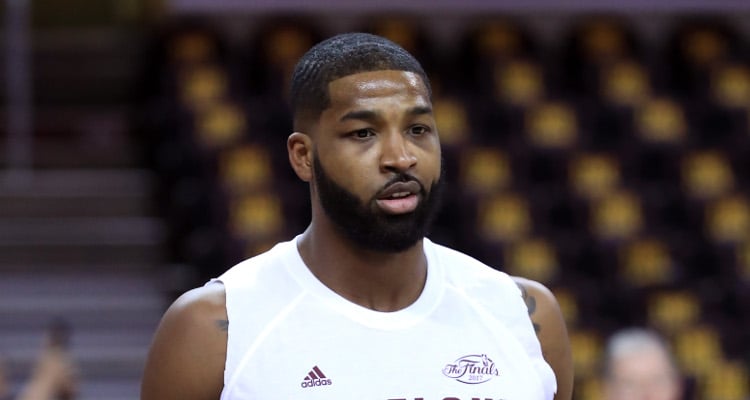 Khloe Kardashian seemed to be in good spirits while rooting for her boyfriend, Tristan Thompson, during Game 4 of the NBA Finals in Ohio on Friday night. The 32-year-old reality star was seen attending the game between Golden State Warriors and Cleveland Cavaliers. Kardashian and Thompson have been dating for almost a year now, although their relationship has mostly been long distance. Kardashian was cheering on Thompson and his team, and even showed up in her boyfriend’s jersey! However, she was not alone to cheer on her man. Her mother Kris, sister Kourtney, niece Penelope, and nephew Mason were also spotted at the game. If you want to know who Tristan Thompson is and learn more about him, then continue reading.

The basketball star was born on March 13, 1991, which makes Tristan Thompson’s age 26. He was born in Toronto, Ontario to Trevor and Andrea Thompson, who are from Jamaica. Thompson has four younger brothers, one of whom was a basketball player at Wesley Christian High School, in Allen, Kentucky. Thompson is related to the former Canadian Football League defensive tackle, Jemal Thompson.

Thompson attended St. Marguerite d’Youville Secondary School in Brampton, Ontario. However, for his sophomore year, he transferred to Saint Benedict’s Preparatory School in Newark, New Jersey before going to Findlay Prep. After graduating from high school, he attended University of Texas, Austin.

While studying at St. Benedict Prep, Thompson worked on his basketball skills. He played basketball for Findlay Prep in Nevada and was also a part of the 2010 World Select Team at the annual Nike Hoop Summit. During his senior year, he was named McDonald’s All-American. Thompson played one season for the Texas Longhorns, where he had a total of 36 games with an average of 13.1 points, 2.4 blocks, and 7.8 rebounds.

In 2011, Thompson was chosen to play for Cleveland Cavaliers. He signed a contract with them on December 9, 2011 and played his first game against the Toronto Raptors on December 26. For the 2011-2012 season, he was named the NBA All-Rookie Second Team. During the 2012-13 season, he averaged a career-high with 11.7 points, 9.4 rebounds, and 1.3 assists per games. In 2015 and 2016, Thompson made a playoff appearance. Additionally, he won the 2016 NBA championship along with LeBron James, Kevin Love, and Kyrie Irving.

It looks even better than I imagined… One of the greatest moments of my life. Now I want to do it all over again… #WeNeedSomeReallyBigRings

Thompson’s net worth is estimated to be $8.0 million and his salary is roughly $5.1 million.

In 2015, he signed a five-year contract with the Cavaliers worth $82.0 million. Most of his wealth comes from his flourishing career and the various endorsement deals he has signed.

Merry Christmas & Happy Holidays from me and mines, to you and yours.

Once upon a time, Tristan Thompson was dating Jordy Craig. The two even have a baby together, Prince Thompson, who was born on December 12, 2016, in Los Angeles, California. After his split from Craig, Thompson started dating reality star Khloe Kardashian, and it looks like the two are planning to have children together! During an episode of Keeping up with the Kardashians, the reality star revealed, “Tristan and I definitely talk about starting a family. He wants to have five or six kids with me and that’s lovely. We could start at one and we could grow from there. But now knowing I’m not on birth control is just like—it’s scary. It’s like a really big step.”