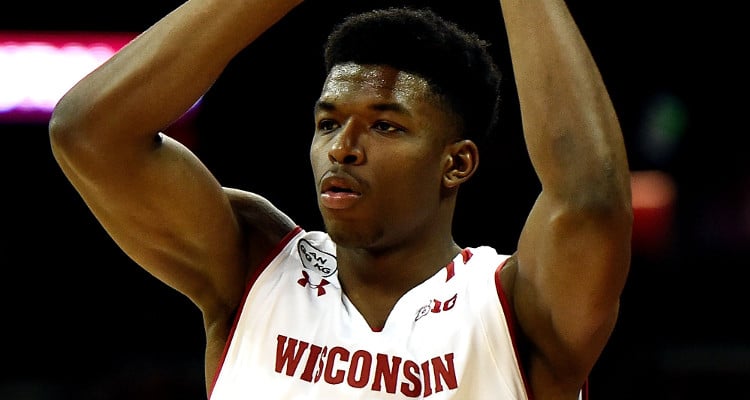 Allen Iverson is not the only Iverson who can shoot hoops! His younger cousin, Khalil Iverson, has overcome many hardships and is making a name for himself in the NCAA. We’ve got all you need to know about him, right here!

If you’ve got Iverson on your uniform when you step onto the basketball court, there are some high expectations. But Khalil Iverson is all about the game, not the name. With the 2017 NCAA championships at its peak, Iverson was in top form, but a personal tragedy caused a hitch. If you’re curious about this young player with the all-too-familiar last name, this Khalil Iverson wiki is for you! We’ve got all the details on his father, cousin, net worth, stats, and the answer to the all-important question: is Khalil Iverson Allen Iverson’s son?

#1. The Freshman with NBA Potential

At 19, Khalil Iverson won’t be eligible for the NBA draft until 2019, but his prospects already look great. He studied at Hayes high school in Ohio where, as a senior, he averaged 17 points, 12 rebounds, 7 assists, 2.8 blocks and 2 steals per game. University of Wisconsin basketball coach, Bo Ryan scouted the teen, who was lauded by Hayes coach, Jordan Blackburn.

Khalil had offers from Bowling Green and North Carolina-Asheville. However, he chose Wisconsin and its basketball scholarship so his mom wouldn’t have to pay for his college. He now attends the University of Wisconsin, where he plays for the Wisconsin Badgers. Khalil played 34 games as a freshman in his first NCAA season, where he achieved some career highs. Since he hasn’t gone pro yet, he doesn’t have a net worth. But if he gets through the NBA draft, he’s sure to make some big career earnings!

Also Read: Allen Iverson Net Worth: How Much is the NBA Hall of Famer Worth?

#2. How is Khalil Related to Allen Iverson?

When we hear Iverson and basketball in the same sentence, NBA All-Star, Allen Iverson comes to mind. The former Philadelphia 76er has had a rather turbulent off-court life, but there’s no doubt he dominated the NBA with his plays. So, when a young Khalil Iverson arrived on the scene, many wondered about his connection to Allen. Some even ask if Khalil is Allen’s son!

Allen has five children with his ex-wife, Tawanna Turner. His eldest daughter, Tiaura, is 22 years old. He’s also father to 18-year-old Allen II, 13-year-old Isaiah, 11-year-old Messiah, and eight-year-old Dream. He doesn’t have any other children from other relationships. Khalil is the son of Kevin and Tracey Iverson. Kevin Iverson is Allen’s uncle, which makes Khalil and his siblings (Kevin Jr. and Kourtnie) Allen’s cousins.

Cuz I love my momma. And I know she got me.❤️

Allen and Khalil come from a basketball-obsessed family. The two have another cousin named Kuran Iverson, who also plays in the NCAA. Kuran’s father, Eddie is Allen’s uncle, but Kuran himself hasn’t met his pro-ball playing cousin. “If people ask me, I just tell him I’m his first cousin. But I don’t get caught up in the name thing. I just want to be me. And I just want to become a better player,” he said about being related to Allen.

Kuran currently majors in Human Development & Family Studies at Rhode Island University, where he plays for the Rams, and previously played for Memphis. Besides being the cousin of Allen and Khalil, he’s also the nephew of Marcus Camby, the former NBA All-Defensive Team member.

#4. He Braved Personal Losses to Play

In 2014, Kevin Iverson’s grocery trip took a tragic turn. “He went to the grocery store and just fell down,” Khalil said. His father had a heart attack and died at the age of 43. Khalil was still in high school at that time and it was his father who pushed him to play.

Khalil used his father’s death to drive him further. “If I’m having a bad day I just think about him and it pushes me and gets me over that last little hump and makes me work that much harder,” he explained. According to his mother, if Kevin was alive he would be very proud of his son and how far he’s come.

Khalil’s loss didn’t end there. On Friday’s (March 10) NCAA game, Khalil was ready to celebrate his team’s victory over Indiana. Instead, his brother delivered a sad news to him in the locker room. Two of their cousins, aged 27 and 26, had been shot to death in Columbus, Ohio. He even tweeted about the incident on the day of his next match. His sister’s tweets reveal their names were Reese and Jevohn.

Khalil Iverson missed Wisconsin’s final two games in the Big Ten tournament to return home with his family. But he was back to his team before the Badgers took on the Virginia Tech Hokies. When asked if dealing with the loss of two more people close to him would make it difficult to focus on the game, he responded, “As of right now, I’m just trying not to think about it too much since I’m here. I’m trying to focus on basketball as much as I can.”

Khalil certainly put on a brave front as he scored 11 points and seven rebounds in Thursday (March 16) night’s game. The Badgers beat the Hokies 84-74 to move to the second round of the tournament.