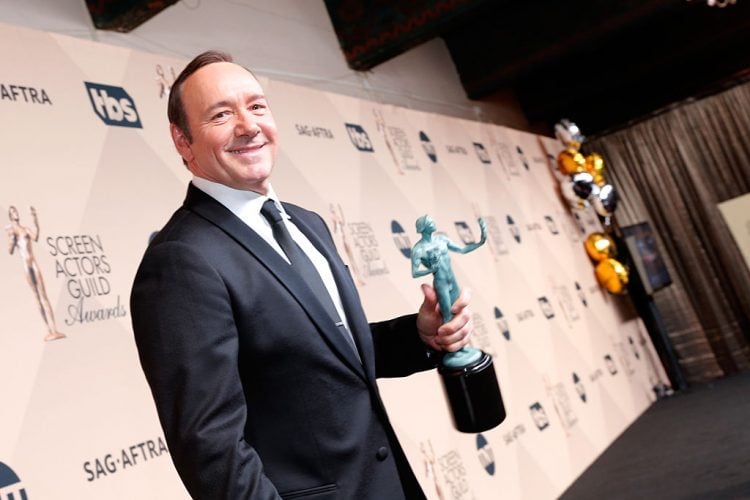 Kevin Spacey has won numerous awards and has acted in highly acclaimed films, as well as television and theater productions. He has performed all over the world and is one of the best actors of his generation. But now, Spacey’s name was splashed across the headlines recently due to allegations made against him by another actor. Has the bad publicity affected his net worth? Seeing as he was removed as the lead in House of Cards (and seemingly blacklisted from work ever since), it’s possible his wealth has taken a hit.

Keep reading to know how Kevin Spacey amassed his fortune and more about his downward spiral.

Kevin Spacey Fowler was born on July 26, 1959, in South Orange, New Jersey, which makes Kevin Spacey’s age 58. His mother was a secretary, and his father was a data consultant and technical writer. His family relocated to California when Spacey was four years old.

During his years at Chatsworth High School in California, Spacey discovered his love of performing when he appeared in a production of The Sound of Music. Interestingly, he first pursued work as a comedian before going back into the acting.

When Spacey began attending Julliard, he was in the Group 12 division, which also included actors like Evan Handler (Californication, Sex and the City), Elizabeth McGovern (Downton Abby, Kick-Ass), and Ving Rhames (Pulp Fiction, Dawn of the Dead).

It was around this time that the actor would start using “Spacey” as part of his stage name. Spacey is not only his middle name, but it’s also his grandmother’s maiden name.

‪Just finished my first run through for Darrow. Arthur Ashe Stadium is now an intimate theatre! See you thurs night (link in bio)

The one thing that you will notice about most of the big-name actors that you love is that they usually did many acting gigs before they make their big break. And Kevin Spacey is no exception to this.

While he always kept a foot in the world of theater, Spacey began to experiment with film and television. He had small roles in television shows like Crime Story, Wiseguys, and L.A. Law, as well as films like See No Evil, Hear No Evil. But, it wasn’t until Spacey starred in Glengarry Glen Ross that critics began to notice him.

In 1991, Spacey won a Tony for his performance in Lost in Yonkers. But 1995 was his breakout year when he played Verbal Kent in The Usual Suspects and the methodical serial killer John Doe in Se7en.

60 years ago my idol and mentor, Jack Lemmon, received his first Oscar for Best Supporting Actor…20 years ago, I…

Spacey would go on to win an Oscar for Best Supporting Actor for The Usual Suspects. And four years later, he had another Oscar win, this time for Best Actor for his role in American Beauty.

While enjoying an incredibly good film career, Spacey also made journeys back into the theater with various Broadway and London productions. He became the artistic director of The Old Vic theater in London in 2003, shepherding the theater’s productions until 2015.

In 2012, Spacey began work on House of Cards, a Netflix television program based on a TV show from the UK. The political drama was an instant hit and launched a new world of possibilities for Netflix and streaming services everywhere. In fact, the show was nominated for nine Emmys in its first year and was the first web-only show to win an award when Spacey won Best Actor in 2015.

Spacey is very close to achieving EGOT status. This is when performers have won an Emmy, Grammy, Oscar, and a Tony. To date, there are only 12 people who have been able to accomplish this, and Spacey came close with his Grammy nomination for the Under the Sea soundtrack.

For those who aren’t aware, Spacey came under fire in late 2017 for allegations of sexual assault. In October 2017, Spacey was accused of making sexual advances toward another actor named Anthony Rapp in 1986, when Rapp was just 14 years old. In an interview, Rapp revealed details about the incident that took place in 1986, saying that Spacey had him over to his apartment for a party. But at the end of the night, Spacey had placed him on his bed, climbed on top of him, and made sexual advances. Rapp had kept silent on the matter until now. Spacey took to Twitter to post that he had no recollection of the encounter and publicly apologized.

“If I did behave then as he describes, I owe him the sincerest apology for what would have been deeply inappropriate drunken behavior,” Spacey wrote.

He added, “This story has encouraged me to address other things about my life. I know that there are other stories out there about me and that some have been fueled by the fact that I have been so protective of my privacy.”

It was also the first time that Spacey publicly stated that “I now choose to live as a gay man.” Even though his apology seemed sincere, the uproar from Twitter was swift and harsh. Many believed he chose to “come out” at that time to soften or deflect the real issue; that he sexually assaulted an underage boy.

Because of the claims, among other allegations that surfaced thereafter, Spacey was cut from Netflix and removed from his role as Frank Underwood in House of Cards. He was also cut from a movie he had been starring in called All the Money in the World and his scenes were re-shot with Christopher Plummer replacing him for the role.

Kevin Spacey’s house was sold recently for a fair amount of money. But, the actor’s personal fortune is difficult to determine as he’s had a long and steady career for nearly three decades.

Kevin Spacey’s salary demands are quite considerable. For season 5 of House of Cards, he was rumored to make $10.0 million. But he also takes lower paying theater roles due to his love of performing.

Here are some numbers to help put Kevin Spacey’s net worth into context.

Well, it looks like Kevin Spacey is still doing okay in the financial department. However, with his main role in House of Cards cut and his on-screen credits seemingly dwindling because of the sexual assault allegations, Spacey wealth could certainly see a decline.