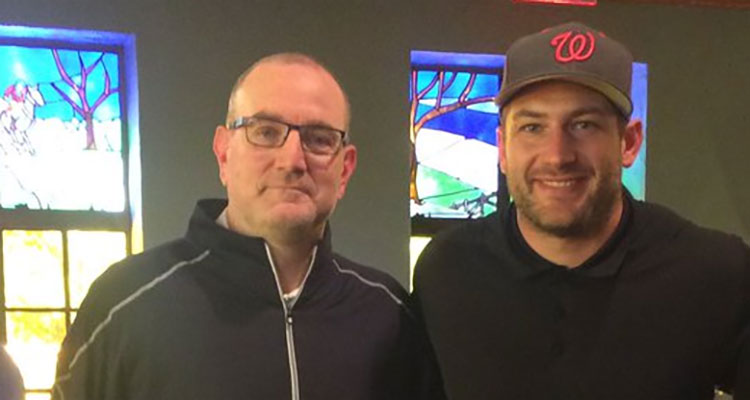 Kevin Sheehan took to Twitter to reveal he’s leaving the Team 980, the Washington Redskins’ flagship ESPN radio station. Together with former Washington Redskins tight end Chris Cooley, Sheehan has hosted Cooley & Kevin since 2016. But both popular hosts have been MIA on their eponymous show for a while. Is Cooley & Kevin canceled? Here’s what you need to know about Kevin Sheehan’s departure from Team 980.

On August 9, 2018, some time after longtime Cooley & Kevin fans heard the latest broadcast of the show, Kevin Sheehan announced he was leaving Team 980.

Without elaborating on the details, Sheehan wrote in a single tweet that he will miss Team 980 and is hopeful for the Washington Redskins’ season. He even wished the Redskins Derrius Guice a speedy recovery from his knee injury.

The announcement was, of course, met with shock from the loyal listeners of Cooley & Kevin.

Sheehan’s cohost, Chris Cooley, has been absent for a while now, and listeners have been wondering about his whereabouts, too. Kevin also had been MIA for a while.

In the recent days, The Morning Blitz with Al Galdi, which airs in the time slot before Cooley & Kevin, has been extended to cover the programming gap.

With Sheehan’s departure from the show, Team 980 listeners fear Cooley & Kevin will be canceled.

It might as well be for the loyal fans.

Twitter users have replied to Sheehan’s announcement with shock and sadness. Many can’t imagine their weekday morning sportscasts without Kevin and Chris.

Some have gone as far as to declare they won’t be tuning into Team 980 if Sheehan or Cooley won’t be on it. 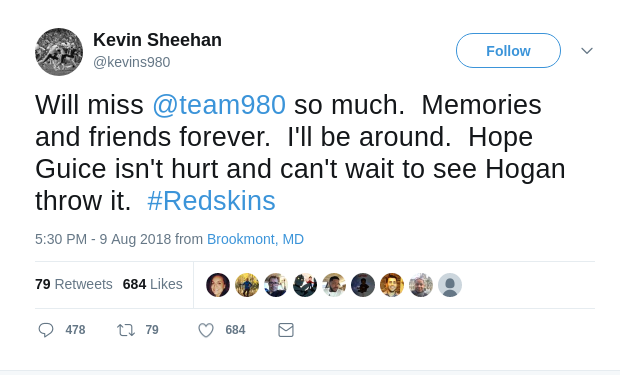 Why Is Kevin Sheehan Leaving Team 980?

Sheehan hasn’t specified the reason for leaving the station nor has the station commented on his departure. But that hasn’t stopped the speculation for possible reasons Cooley & Kevin might be going off the air.

In early August, Urban One media conglomerate bought Team 980 on WTEM-AM from Redskins owner Daniel Snyder. Since the sale, Team 980’s star programming lineup has seen considerable changes, with most of the prominent hosts being absent.

Chris Cooley, along with Rick “Doc” Walker (the cohost of the midday show, Inside the Locker Room) were among the first group of Team 980 people laid off after the sale.

It’s unclear if the new guard is the reason for Sheehan’s departure as well. It’s very likely that Sheehan followed suit after Cooley’s departure.

Neither Sheehan’s nor Cooley’s plans for the future are certain. Both hosts have yet to announce anything.

However, some fans speculate that Kevin Sheehan might be scouted by the other Virginia-based station, 106.7 The Fan.