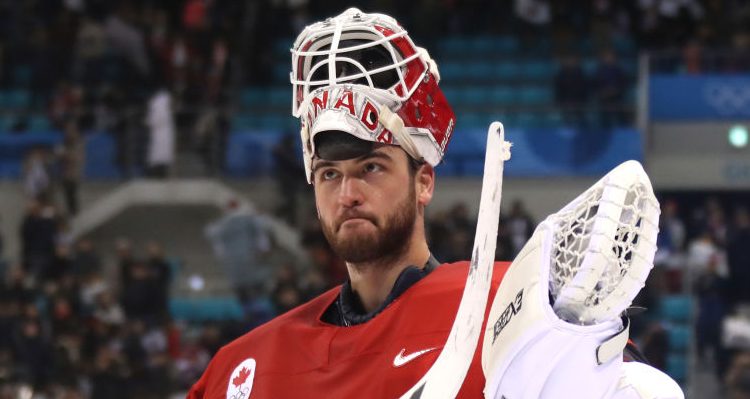 Team Canada is coming off a terrible loss to Germany, a loss the country didn’t expect at the winter Olympics. But all the hoopla is surrounding Kevin Poulin, Team Canada’s goalie. Now, everyone wants to know more about him, from his career stats to his personal life. So, get the scoop on the Canadian goalie with details from Kevin Poulin’s wiki, right here!

Born on April 12, 1990, in Montreal, Quebec, Canada, Kevin Poulin’s age is 27. Like many Canadian boys, Poulin took to hockey at an early age. But unlike many other Canadian children, he was actually pretty good at it!

Not much is known about Kevin Poulin’s family life. However, we do know that his wife is named Shanna Poulin.

It appears that the couple has at least one child, if not two, as seen in photos from Poulin’s various social media sources.

In 2006, Poulin began to play junior hockey in the Quebec Major Junior Hockey League (QMJHL) with the Victoriaville Tigers. Despite being drafted by the New York Islanders in 2008, Poulin played for the Tigers from 2006 to 2010, when he moved into the AHL with the Bridgeport Sound Tigers.

Poulin played for Bridgeport for a year before being called up to play for the Islanders for a bit. This became a pattern for Poulin between 2010 and 2015. So, he would be asked to play for New York when needed and then was sent back to Bridgeport.

By 2015, Poulin was set adrift among several teams’ feeder teams. Eventually, he ended up in the Kontinental Hockey League (KHL) in 2016. The league plays in parts of Europe and China.

However, it wouldn’t be long until his country came calling.

In 2017, the NHL announced that their players would not be participating in the 2018 Olympic Winter Games. For some fans, this was bad.

Oddly, one of Canada’s national exports is the best hockey players who end up in the NHL. So, taking the NHL player possibility from Team Canada would definitely hurt the country’s chances at a medal.

But at the same time, the decision did open up the Olympic door for different types players. This included amateur players who haven’t quite made it to the NHL yet and older players that had no NHL team to call home.

So, Poulin got the call to play net for Team Canada. And at 27-years-old, he is beginning to run out of Olympic chances, so there was no debate. The goalie picked up his pads and headed to South Korea.

What Does This Mean for Kevin Poulin’s Career?

Although Poulin is not that old, the clock on his possible NHL career is beginning to wind down. While a medal win would have given the goalie more of a spotlight, there is no doubt that more than a few NHL coaches and scouts took note of the work he did during the Olympics.

So, is Kevin Poulin going to get another crack at the big time? We aren’t sure, but don’t be surprised if you see him in an NHL jersey next year!