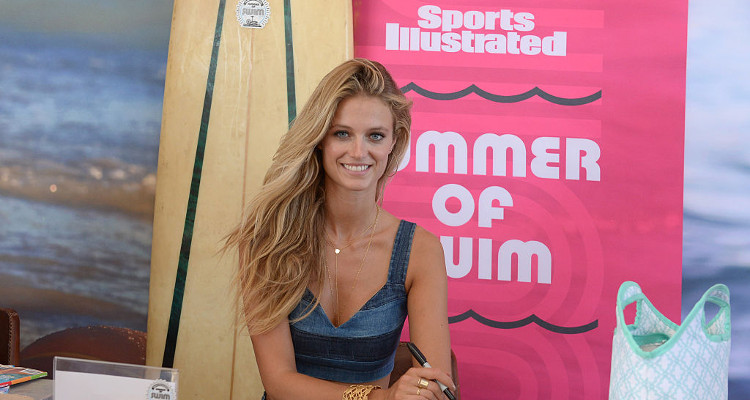 Kevin Love is getting a lot of love on the court for some rather spectacular game plays. Off the court, the Cleveland Cavalier has a pretty great romantic life, too. Kevin Love’s girlfriend in 2017 is a very beautiful model named Kate Bock. We’ve got all you need to know about her, right here.

The Cleveland Cavaliers defeated the Boston Celtics, gaining a 3-1 lead in the best-of-seven Eastern Conference Finals. The victory wouldn’t have been possible without Kevin Love getting those defensive rebounds, so it’s no surprise he’s getting a lot of praise… and love (pun intended)! But what about Kevin Love’s love life? He is dating a gorgeous woman, who just so happens to be a model. Kevin Love and Kate Bock are very cute together, and we’d like to focus on her for a moment. Here’s everything to know about Kate Bock.

Kate Bock is a model and was featured in Sports Illustrated from 2013 to 2017. She was named “Rookie of the Year” for her first appearance in the magazine at just 21 years old. She reportedly won 41% of the votes from online readers. Signed with Lizbell Agency and Elite Model Management, she has modeled for Victoria’s Secret and was featured in magazines like Maxim and Elle.

Bock had a small cameo in a music video for The Lonely Island’s, “Jack Sparrow.” Though brief, it’s very memorable and also features the fantastic Michael Bolton. You can check out the video right here.

#2. She’s was Discovered in a Swimming Pool

The 27-year-old is a native of Vancouver, Canada and is the middle child in her family. At the age of 12, she was discovered by a modeling scout from Lizbell while in a swimming pool.

But as a child, she wasn’t exactly model material. “I had braces, and I was a little gangly. Not a little—I was really tall and gangly,” she explained. She wasn’t modeling full-time and while on summer vacation, she opted for camp rather than modeling gigs in New York.

However, after graduating from high school, she took modeling very seriously and moved to Paris. She studied at a French Immersion school for four years and is now fluent in French. She shared an apartment with other models in Paris.

While modeling occupies a huge chunk of her life, Kate Bock has other ventures. She launched her own jewelry line, Cattura Jewelry, last year. The line consists of eye-catching body chains designed by Bock, handcrafted by an Italian designer and made in New York.

Bock styles many of her looks —including her swimsuit photoshoots— with a body chain. “Every time I’m in yoga, spin class or on the beach, girls are always coming up to me and asking where my body chain is from. So I decided to make them available to anyone!” said Kate. “Cattura” means “to capture” and Bock explains the idea is that the body chain “captures your body.”

From working at Dairy Queen to becoming a big time model, Bock has never looked back. However, her net worth hasn’t been calculated yet, so we don’t exactly know how much the girl is banking for being a beauty. Her boyfriend, on the other hand, has a net worth of $44.0 million! Kevin Love not only has a lucrative contract with the Cavaliers, he has several high-paying endorsement deals, as well. According to Forbes, he earns $23.9 million annually.

Bock is a hockey fan, but not a big fan of many other sports. By her own admittance, the Knicks game where she was given her “Rookie of the Year” trophy was her first time at a basketball game! Now, she frequents many basketball games to cheer on her Love.

She also shares pictures of her time with the basketball pro, including the first time she went to a football game last year. Bock also had the opportunity to visit the White House with Love, when then-President Barack Obama invited the Cavaliers over.

There’s no such thing as fear for Kate Bock! It’s something she claims helped her move to Paris at a young age. She is a certified lifeguard, she loves skydiving, and she’s avid snowboarder. In fact, she even sleeps with a snowboard under her bed in case an opportunity ever presents itself!

She also loves chocolate lava cake (who doesn’t?) and has a never ending love for Paul Newman. Bock can also recite every Sex and the City episode by heart.