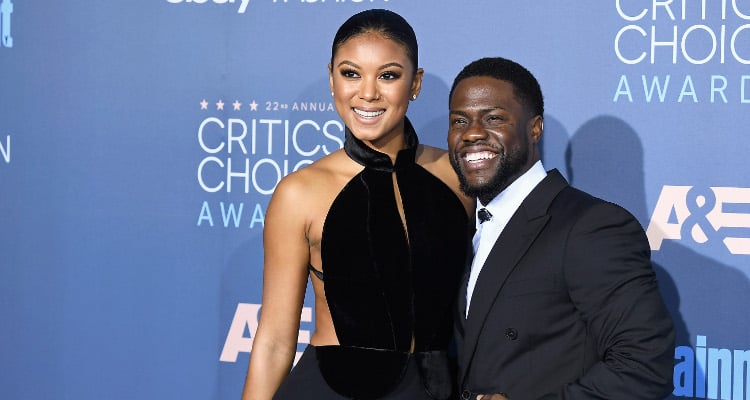 You’d think Kevin Hart and Eniko Parrish would be enjoying pure bliss as they prepare for the arrival of their first child. But the actor is busy tackling negative attention after rumors of a video showing Kevin Hart “cheating” on his wife made headlines.

Kevin Hart was seemingly doing well with his new book and upcoming child. But the comedian has nothing to laugh about in the face of this latest scandal.

An alleged video of Kevin Hart cheating on his wife, Eniko Parrish, has become the cause of the actor’s distress. The actor is reportedly a target of extortion based on the incriminating video.

Find out all about the scandal that can jeopardize Kevin Hart’s marriage, right here.

Kevin Hart and Eniko Parrish are expecting their first child together. The actor has a daughter named Heaven and a son named Hendrix with his first wife, Torrei Hart.

Eniko Parrish and Torrei Hart got into a mini-scandal last month when Parrish celebrated eight years of being with her husband. Except that eight years ago, the Harts were still married. They divorced in 2011 after which Hart married Parrish.

Already rumored to have cheated on his first wife, Hart posted a video on his Instagram recently where he publicly apologized to Parrish and his children. Grant said, “I’m at a place in my life where I feel like I have a target on my back, and because of that, I should make smart decisions.” He continued, “I made a bad error in judgement and put myself in an environment where only bad things can happen, and they did.”

Sending so many apologies to my wife & kids. I gotta do better and I will. I'm not perfect and have never claimed to be …I love you all.

Reports claim that Hart is trying to win favor and save face by publicly apologizing to his wife for something huge. Soon enough, details emerged that a woman was allegedly trying to extort money from the actor. Now, she is reportedly blackmailing him with an explicit video of Hart allegedly cheating on Parrish. Blurry stills (supposedly from the media) have only fueled the cheating and extortion scandal.

Law enforcement is now involved in this case, and the details are being kept under wraps. Most of the facts known are from reports based on TMZ’s investigation of the story.

While speculation continues to intensify as to whether such a video truly exists and if it really is Kevin Hart, new details emerge. The woman at the center of the scandal has been identified as Montia Sabbag. And she is preparing her case by hiring high-powered celebrity attorney, Lisa Bloom.

According to Bloom, the actress and model was involved with Hart a month ago and “Since that time, she has been the subject of false, vicious attacks on her character.”

Sabbag is expected to present her side of the story in a press conference on September 20. Meanwhile, Hart and Parrish displayed a unified front as they stepped out for a lunch date on Tuesday.

I represent the woman at the center of the Kevin Hart scandal. Press conference tomorrow. pic.twitter.com/X9KV3zYwfY