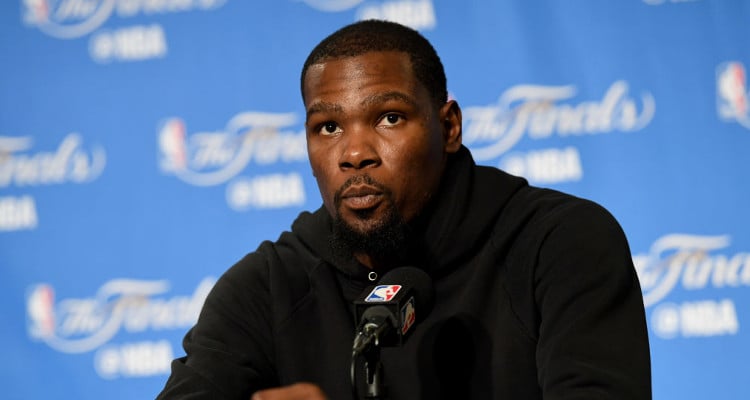 Kevin Durant of the Golden State Warriors delivered the best performance of his NBA career in Game 1 of the NBA Finals. To many, it looked like he also engaged in a little stare-down with Cleveland Cavaliers fan, Rihanna.

The Golden State Warriors won Game 1 of the NBA Finals with their star, Kevin Durant’s perfect play. Durant scored 38 points —the fourth NBA player to score at least 25 points in his first six NBA Finals games. And let’s not leave out his little “altercation” with Rihanna during the game that set social media abuzz. Check out Kevin Durant’s wiki to know everything about the player, including Kevin Durant’s girlfriend, Jasmine Shine.

He Reconciled with His Father

Durant was born in Washington D.C. to Wanda Durant and Wayne Pratt. When Kevin was not even one, Pratt abandoned the family leaving Wanda to raise their children by herself. Durant has three siblings, two brothers, Tony and Rayvonne, and a sister named Brianna. Wanda raised her kids with the help of her mother, Barbara Davis. The story of Wanda’s journey as a single mom has been documented in the Lifetime movie, The Real MVP: The Wanda Durant Story.

As a young boy, Durant was unusually tall, reaching a height of 6’0″ when he was in middle school! He spent most of his time at the Seat Pleasant Recreation Center where he learned how to play basketball from Taras Brown, his Amateur Athletic Union coach who later became known as his godfather.

Growing up, Kevin Durant dreamed of playing for the Toronto Raptors, as Vince Carter was his favorite player. He began competing in the AAU with several players who would go on to play in the NBA. Durant wears the #35 jersey in honor of his AAU coach, Charles Craig, who was shot and killed when he was 35 years old.

After playing two years of high school basketball at the National Christian Academy and spending one year at the Oak Hill Academy, Durant transferred to Montrose Christian School for his senior year. He continued to grow until his height reached 6’9” and he was the star player of the University of Texas. Durant was the first freshman ever to win any National Player of the Year awards.

You’ve all heard the great debate about Kevin Durant’s height, but you’ve got to wonder about a guy who would lie to make himself shorter! Kevin Durant’s height is actually recorded at 6’10”! Kevin Durant finally admitted his real height to Bob Fitzgerald on KNBR saying, “Since I love you guys so much, I was recorded at 6’10” and three-quarters with no shoes, so with my shoes on I’m 7-feet.” Fans began to notice when standing next to other players, Durant was actually taller than those who were 6’10”. But why the big secret? According to Durnat, “I just like messin’ with people. They just ask me so much… yeah, I just like messin’ with people.”

One of the Highest Paid Athletes

The 28-year-old hasn’t fulfilled his dream to play for the Raptors just yet, but he’s done pretty well for himself since being picked up by the Seattle Supersonics in the 2007 draft. In his first career game, he registered 18 points, 5 rebounds, and 3 steals against the Denver Nuggets. He was named Rookie of the Year and was at par with other acclaimed teen players like LeBron James and Carmelo Anthony.

After the 2007-08 season, the Supersonics moved to Oklahoma City and were renamed the Thunder. His salary had increased from $4.0 million to $12.o million over five seasons. In 2016, he signed with the Warriors for a salary of $26.0 million.

Last year, Kevin Durant was named #5 on Forbes‘ list of Highest Paid Athletes, earning $56.0 million annually. He makes $36.0 million from endorsements alone and has an unbelievable net worth of $120.0 million. While his Nike deal and the contract extension can make him $300.0 million in 10 years, Durant also has deals with Gatorade, Beats by Dre, Postmates, and more. He even built his own brand in collaboration with Foot Locker and Neff!

The Warrior was once engaged to WNBA player Monica Wright, but they called off the wedding. He was also once linked to former Destiny’s Child member Letoya Luckett, but the rumors were never confirmed.

He has been in an on-again off-again relationship with Jasmine Shine since 2014. Not much is known about her, except that she’s a model. There have been next no pictures of Shine and Durant on social media since he deleted his Instagram account last year, but reportedly, the couple are still a thing.

Does Durant Have Beef with Rihanna?

As many may know, Rihanna is a well-documented fan of LeBron James. So, naturally, she was at the first game of the finals to cheer on the Cleveland Cavaliers. Riri took to heckling the Golden State Warriors, Durant in particular, earning her what looked like some stern looks from the basketball pro, and making Twitter go crazy.

During Durant’s free throw, Riri reportedly shouted “Brick!” making the Warriors star look back. Then, it looked like he later engaged in a brief stare-down with the singer after nailing a three-pointer, and obviously, social media did what they do best; blew it way out of proportion!

After the game, the media questioned Durant about his silent spat with Rihanna and he claimed he didn’t remember it. After being told it was all over social media, Durant (visibly confused) said, “Really?”  Stephen Curry, who was sitting next to him, jokingly cautioned him saying, “Don’t get into that trap.” Durant laughed if off and replied, “Yeah, I won’t get into that. I’m cool. Y’all have fun with that.” We salute you for taking the high road, Mr. Durant!