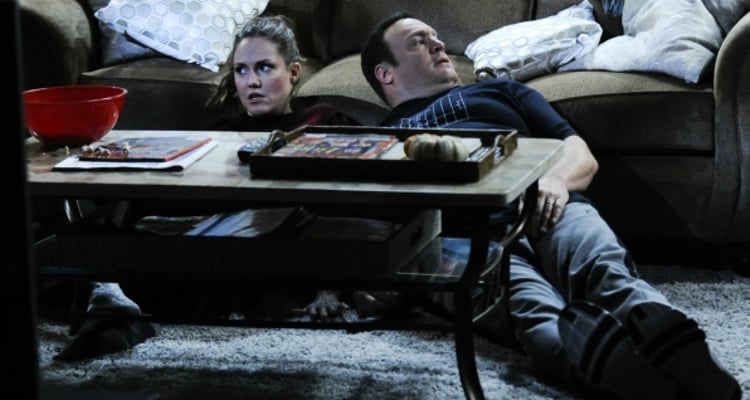 Kevin Can Wait showrunners learned how not to kill a character off, the hard way. Although the season 2 premiere aired over a week ago, many fans are still angry because Kevin Can Wait’s wife was killed off the show, and with minimal explanation! If you want to know what the drama is all about and what happened to the wife on Kevin Can Wait, then keep reading!

The first season of the show focused on Kevin Gable (Kevin James), a retired police officer, his wife Donna (Erinn Hayes), and their three kids. Fans came to love Donna and could not wait to see more of her in season 2. But before the premiere, it was revealed that Erinn Hayes would not be returning to Kevin Can Wait!

But there is more to the story of what happened to the wife on Kevin Can Wait. Months before the premiere, it was revealed that Donna Gable would be killed off the show! Disappointed, viewers wanted to see exactly how the producers would pull it off. Hayes confirmed the news and thanked her fans on Twitter writing, “True, I’ve been let go from the show. Very sad, I had a great experience season 1. Thank you for all the support from our wonderful fans.”

How Did Donna Die on Kevin Can Wait?

It was quickly made public that Donna dies in order for Kevin’s old partner, now boss, Vanessa Cellucci (played by his former TV wife, Leah Remini) to be a regular on season 2. But the network promised that Donna’s death would be treated “with dignity and respect,” so fans tuned in to see what would happen. Two episodes in, we still do not know how the wife dies on Kevin Can Wait.

All we know is that this season currently takes place over a year after Donna’s death, but details of how she died are still unknown.

#KevinCanWait killed off Kevin's wife tonight & spent less than one minute talking about her death in the whole ep https://t.co/GxvcdO0gnC pic.twitter.com/CexQHJEQ23

Producer Rob Long said, “The goal was to give Kevin’s character a real drive and a real predicament [involving] how a family comes back together [after tragedy],” adding, “Also, out of respect for the character of Donna — and certainly the way that Erinn Hayes portrayed her — it seemed like the only right and fair way to treat her character.” However, viewers do not think that Donna’s death was handled well at all. In fact, many are upset and took to social media to express their anger.

Some fans did not know that they were going to kill Donna off, and others are disappointed that there is still no closure to Kevin’s wife dying. Take a look at how some people reacted to Donna’s death on Kevin Can Wait.

A Lot of Us Feel This Way

Wow they just kill her of like it’s nothing #KevinCanWait pic.twitter.com/vwvdPzTIFj

Threats to Boycott the Show

Never watching #kevincanwait again. Killing off your wife and mother of your children isn't really that funny. Erinn Hayes was hilarious.

Is It Too Late to Bring Hayes Back?

Since the season 2 premiere, ratings for Kevin Can Wait have reportedly gone down! The second episode only had 6.8 million views and an overall 1.4 rating from their targeted 18-49 demographic. Though Remini’s character was supposed to bring in high ratings this season, it looks like fans feel the show was better with Hayes in it.