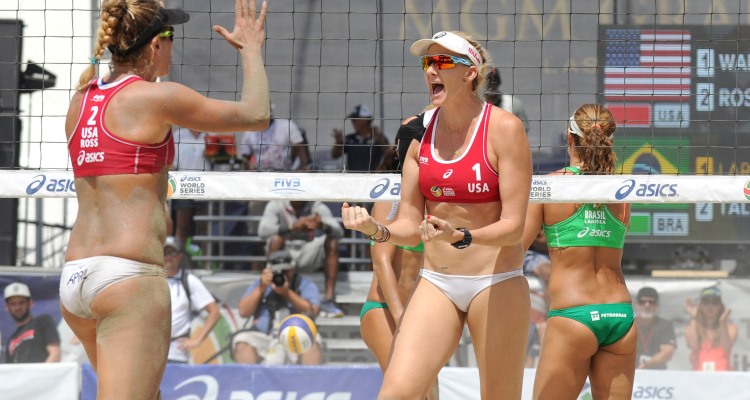 Family is Everything to Kerri and Casey

Kerri Walsh Jennings is married to Casey Jennings, who is also an American beach volleyball player – at least they have one thing in common, that’s for sure! The couple has three children – Joseph, Sundance, and Scout and Kerri was actually pregnant with Sundance when she competed during the London games!

Kerri and Casey are very family-oriented and it’s important to them that their children are aware of how hard-working their parents are. It is important to Kerri and Casey that their children are included in everything family related. Kerri once said in an interview with people magazine, “We want our kids to see us working and working hard and chasing our dreams. They’re very involved in what we do. They’re on our team, so we want them to know what we’re doing — and we’ve grown so much as a family because of everything we do together.”

Casey Jennings has a nickname for Kerri which is “six feet of sunshine” because the volleyball star stands tall at a whopping 6 foot 3!

Kerri Walsh Jennings and Casey Jennings had Some Rough Patches

The volleyball couple weren’t always happy in the sand. There was a time after the Beijing Olympics when the pair didn’t think their marriage was going to last. After those games, Casey began drinking and entered rehab but that didn’t solve the couple’s woes right away. After six months of therapy, the couple worked on their troubles and managed to pull through it all and now, they are better than ever.

Casey noted she remained positive through the ordeal and kept hope that they could pull through.

It seems more people are concerned about the Zika virus than the actual Olympics, but not Kerri. During her match with partner April Ross the crowd was chanting, “Zika!” but Kerri and April didn’t let that stop them from pulling in a win.

The chanting was reported to be far worse for Kerri and April than it was for American soccer goalie, Hope Solo, but Kerri kept her head up, focused on the win and noted, “I don’t pay attention to that stuff.”

As the match continued the spectators stopped focusing on Zika and began to appreciate the sport of volleyball, as well as Kerri’s impressive moves.

She Won’t Stop Being Sexy

Kerri Walsh Jennings has received backlash for her uniform on the sand – or should we say lack thereof. Although there has been a change to the volleyball uniform by the International Volleyball Federation, Kerri insists she’s sticking to the two-piece bikini.

Kerri said in an interview, “It’s something I really feel comfortable with. It’s something I feel empowered by, not distracted with. I’m not a sex symbol; I’m an athlete. I want to be streamlined out there.”

Kerri Walsh Jennings was strongly opposed to the idea of following in fellow Olympian Hope Solo’s route to dance on ‘Dancing with Stars,’ but it seems the volleyball player may be having a change of heart. Previously Kerri didn’t believe they could find her a partner tall enough to dance with, and she noted the fact that she’s a horrible dancer. Previously, she was set on 90 percent not being on the show with a 10 percent possibility – that has since changed to a 60-40 yes-no ratio! At least she hasn’t ruled it out!

Who knows, maybe when the athlete cleans the sand out of her bikini she’ll trade that in for some dancing shoes?

So far this year, Kerri Walsh Jennings is having an amazing time in Rio. With two wins already under her belt, her next game scheduled for August 10th. We’re sure with loving support from her husband, Casey Jennings, she will push through the Zika chants and hot weather to continue her winning streak!