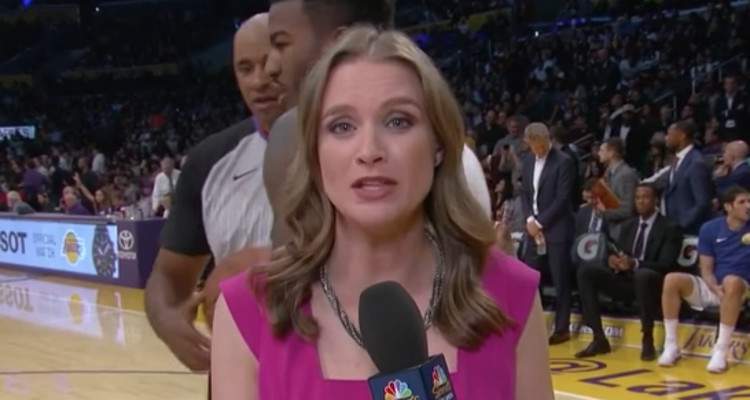 ESPN might have laid her off, but it was NBC’s gain as Kerith Burk is the network’s new Warriors sideline reporter. Her reporting style is fun and she has a great eye for details. Learn more about her in our Kerith Burke wiki.

When ESPN had mass layoff, many worried about their careers. Thankfully for Kerith Burke, about five months after being let go, she is the new NBC Sports Bay Area’s Warriors sideline reporter. Everything you need to know about the reporter is right here in our Kerith Burke wiki.

When former Warriors sideline reporter Roslyn Gold-Onwude accepted an offer from TNT, there was one real choice for NBC to make. Though it may be tough to step into Gold-Onwude’s shoes, we are sure that Burke will add her own flare while covering the team’s NBA journey.

From Burke’s bio, we know that she is from the San Francisco Bay Area and graduated with honors from Washington State University, obtaining a bachelor’s in broadcasting and communication. She has volunteered with the Boys & Girls Clubs of San Francisco since January 2017.

In a September 2016 Q&A focussing on women with an online presence and the future of broadcast journalism, Burke spoke about not revealing her age saying, “I made a LinkedIn (ugh) for my job search and I hesitated when it came to adding the year I graduated college. Maybe I’m nervous over nothing. But when everyone is looking for an edge in a competitive field, ageism makes me pause. To repeat: I am not that old.”

Burke is not new to sports journalism. Her career in the field spans more than a decade. She worked with Sportsnet New York for about four years, where she is mostly remembered for covering the UConn women’s basketball team. She also hosted SNY’s Geno Auriemma Show.

Burke continued to cover women’s basketball as a sideline reporter for NBC’s coverage of the 2016 Rio Olympics. Her love for the sport led her to cover the NBA, and the Warriors in particular, after covering two NBC Sports Bay Area Warriors’ games last season.

Kerith Burke’s Instagram pictures capture her sense of humor and give us a behind-the-scenes look at Warrior games. Her new post has her covering all major social media channels, so even if you are not a basketball fan, it is still worth giving her a follow!