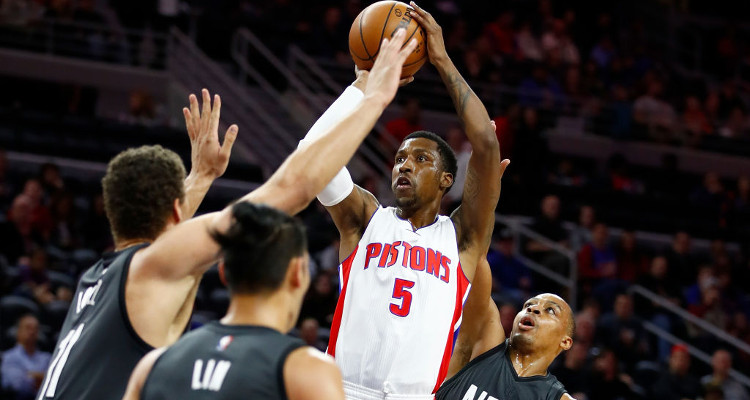 One of the best NBA players has been swooped up. The Los Angeles Lakers closed the deal with Kentavious Caldwell-Pope. The former free agent was let go by the Detroit Pistons and has now signed with the Lakers.

Caldwell-Pope from Georgia was Greenville High School’s most heralded player. In his senior year, he led the team to State Class A Final Four and averaged 31 points and 8.2 rebounds per game. He was even selected to the 2011 All-American Game. Rivals.com named him the No.3 shooting guard prospect and No.12 overall prospect.

He turned down scholarships from Alabama, Florida State, Georgia Tech, and Tennessee for the University of Georgia. A freshman Caldwell-Pope was named to the Coaches All-SEC team which also included fellow future NBA players Bradley Beal, Anthony Davis, and Michael Kidd-Gilchrist. He scored 25 points in a game which was the highest for a UGA freshman in 13 years. With an average of 18.5 points and 7.1 rebounds per game, he was named SEC Player of the Year as a sophomore.

Honored to have been interviewed by Jared Zwerling. Thank you for recognizing my defense. Check out the article! #detroitvseverybody

Caldwell-Pope declared for the 2013 NBA draft where he was the eighth overall pick by the Detroit Pistons. In his rookie year with the Pistons, he scored a career high 30 points against the Oklahoma City Thunder but lost the game.

In the 2014 Summer League, Caldwell-Pope’s stats impressed Pistons head coach, Stan Van Gundy who called him his best perimeter defender. In the 2015 season, he scored another career high of 31 points against the Boston Celtics. In games lost by the Pistons, Caldwell-Pope shined by himself scoring career, season, and team highs. He led the Pistons to the Playoffs for the first time in 2009. However, they lost the series 4-0.

In his four seasons with the Pistons, he earned around $2.0 million a year. His net worth hasn’t been calculated but his total career earnings amount to more than $11.0 million in his entire career. When the team let him go, he had the option of taking the Pistons’ one-year offer worth $4.9 million. Instead, the unrestricted free agent went for the better offer of $18.0 million for playing for the Lakers for a year. If he proves his worth, the Lakers might extend his offer with a bigger payday.

#3. He was Suspended for Two Games

In June this year, the 24-year-old was suspended for two games without pay by the NBA because of some trouble he landed himself in. Caldwell-Pope was pulled over by police back in March for driving 20-mph over the speed limit. He was then arrested for driving while intoxicated after a field sobriety test.

He took responsibility for his carelessness and pleaded guilty for a lesser charge and was sentenced to 12 months probation. At the time, he was a restricted free agent expected to stay with the Pistons. However, the arrest didn’t have anything to do with the Pistons letting him go. The shooting guard is yet to give an outstanding long-term contract-worthy game. The Boston Celtics traded Avery Bradley to the Pistons while Caldwell-Pope was taken away from the Pistons roster to clear cap space.

A few year ago, the Pistons were in Dallas to play against the Mavericks. There a woman named McKenzie, who worked for a local designer, and caught his eye at an event she organized. McKenzie’s friend noticed the shy Kentavious Caldwell-Pope staring at her friend and introduced them. They fell in love and got married.

She didn’t introduce Caldwell-Pope to her son, Kenzo whom she had from a previous relationship, for the first six months they were together. But when she did, he formed an unbreakable bond with Kenzo.

They planned their wedding in six months giving McKenzie very little time to find the perfect dress. But she zeroed in on a Galia Lahav Tiger Lily Dress which moved Caldwell-Pope to tears seeing her walk down the aisle. At their wedding, the NBA player serenaded his wife with songs by Boyz II Men and Justin Bieber. The celebrated their first wedding anniversary in June.

In April, the Pistons were playing against the Toronto Raptors when Caldwell-Pope joined his team in the second half. But no one was mad at him for missing the first half of the game. After all, he just returned after his son was born.

Kentavious and McKenzie Caldwell-Pope welcomed their first child together in April. Ken Jr. was born less than an hour before the game started. The doctors informed him that they were going to induce labor but the timing was unclear. However, head coach Stan Van Gundy told Caldwell-Pope to be with his wife and had another player start the game.

When McKenzie and Ken Jr. were deemed healthy, the new father joined his team for the second half. That upset Gundy more than if Caldwell-Pope had missed the season entirely. The player was greeted with confused teammates rather than congratulations.

But rest assured, Caldwell-Pope had his wife’s approval, “We have conversation, that’s that communication between us and she felt like it was OK. She had her mom there and my mom was there to help out.”

Wheels up with my crew ✈️ Don't mind Kenzo's cape, he doesn't go anywhere without it, oh and the goggles? He picked those up yesterday and said he couldn't see without them ??‍♀️ As a parent, you have to choose your battles and I choose to let my kids express themselves. Rock on boys ?? (Kenzo 5, KJ 2 1/2 months)