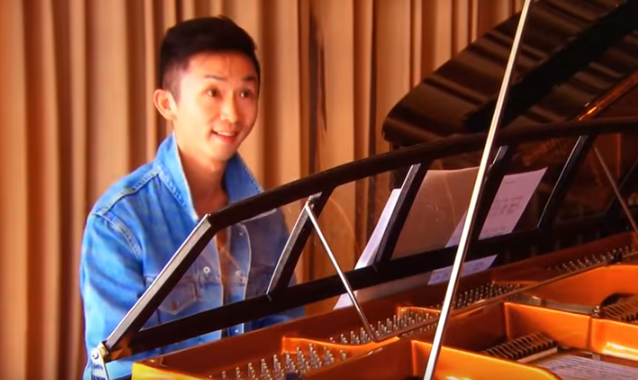 Project Runway season 16 is nearing the final episode and fans are curious about the season finale predictions. Kentaro from Project Runway is one of the finalists, so if you’re rooting for him, check out our Kentaro wiki to learn more about him!

Project Runway’s Kentaro, age unknown, has been getting mixed reviews lately, and is currently the underdog with 33/1 odds. Kentaro Kameyama originates from Los Angeles, and even though Kentaro’s family likes to FaceTime with him, he gets back into gear as soon as Tim Gunn arrives. Kentaro’s worked hard on his collection, but Tim has been confused by its message, saying it’s a “hodgepodge of ideas.” What was even more confusing for Tim, was Kentaro’s explanation of how the piano piece he composed inspired him. “Oh well, I found a dead cat on the street, so after I buried the cat, I put my ear to the ground… and this is the kind of sound I heard,” he strangely explained. What? Despite the criticisms from many, others are completely enamoured with the underdog, saying that he’s brought light to the season. Although Kenya Freeman was eliminated in the last episode, Kentaro is still around and it will be interesting to see if he makes it through!

Friendly and determined, Kentaro has become a fan-favourite character despite his challenges on the show. The designers enjoy his company and the judges think he’s thoughtful and innovative. He’s been complimented for his flawless tailoring and the way his garments fit perfectly. He’s also been full of great ideas and he’s full of professionalism. He received four high scores from the judges during the season, and a design challenge win for “Models Off Duty.”

On the down side, he’s been criticized for his confusing and inconsistent two-look preview of his collection. When he first showed off his collection-in-progress, Tim wasn’t pleased. He criticized the way the vision of the line wasn’t cohesive. He expressed that he felt Kentaro missed the mark and the rest of the judges confirmed his sentiments. Although Kentaro has a great vision, he was unable to communicate it through his work and this cost him big points with the judges. Kentaro will now have to rework his entire collection to find consistency and cohesion to his line before it’s runway time.  If you want to see some of the inspiration behind Kentaro’s work, check out Kentaro’s Instagram (@kentarokameyama).

Watch the Finale on Lifetime!

Part two of the finale airs tonight, November 16, so tune into Lifetime to see if Kentaro’s reworked collection makes the cut for the judges! There’s a lot at stake for each contestant and Kentaro’s been trying very hard to meet their expectations. If you’re rooting for the underdog, let us know what you like the most about him in the comments section! Until the episode airs, check out his closet in Hollywood in the following video:

Never watched the show before? Project Runway is about a group of aspiring designers led by mentor Tim Gunn and host Heidi Lum who are challenged to create the most innovative fashion line, within constraints that continue to change. There’s a new constraint to meet each time, so contest puts each designer to the test in their ability to innovate, create, and execute to the judges’ expectations. Fashion lovers will love this show, so be sure to watch tonight’s episode to see for yourself.