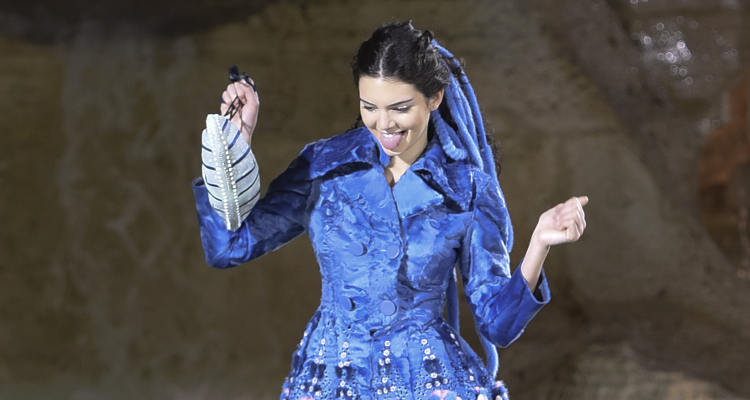 Victoria’s Secret Angel and Vogue model Kendall Jenner was spotted practicing her catwalk for Fashion giant Fendi’s 90th-anniversary show. It seemed like just another Wednesday for her as she walked down a transparent glass ramp suspended over the iconic Trevi Fountain in Rome. The 20-year-old model was clearly in a good mood, smiling and posing while wearing a gorgeous blue coat dress and red calf-high boots. The beautiful blue dress accentuated her long legs and made for a pretty picture. The Keeping Up With The Kardashians star’s dark brown hair was tied into a messy pony at the back of her head. Blue chords matching her outfit trailed down her back as she strutted her stuff on the Fendi catwalk’s glass platform. 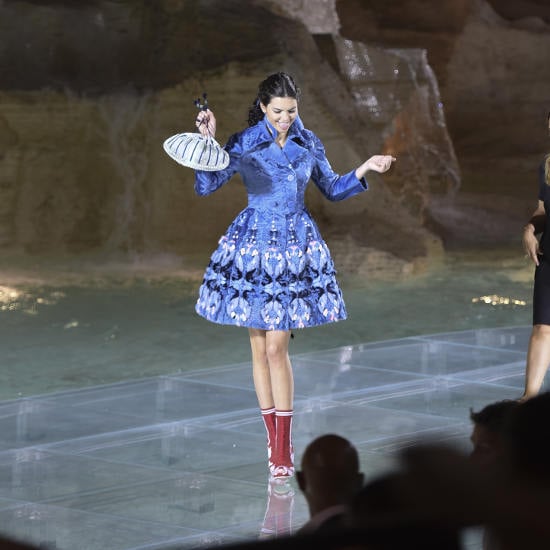 The beautiful model seemed to be having a great time as she stuck her tongue out at spectators and creative director Karl Lagerfeld. Her proud mother, Kris Jenner, posted a photo of Kendall and the 82-year-old fashion mogul with his trademark white hair and black sunglasses. Later Kendall was seen leaving the spectacular venue sporting jeans and a black, sleeveless crop-top, while holding a black leather jacket in one hand. The fashion extravaganza is scheduled to take place on Thursday.

How did Kendall celebrate on the 4th of July? Well, she rented a $2.2k (per night!) beach house on Airbnb and chilled out with her friends by the ocean. She spent Independence Day with her handsome boyfriend (LA Lakers point guard Jordan Clarkson) at the Bootsy Bellows party in Malibu, California. Their relationship has been steadily getting serious as it was reported recently that the model has been dating the 24-year old basketball for a few months since last fall.