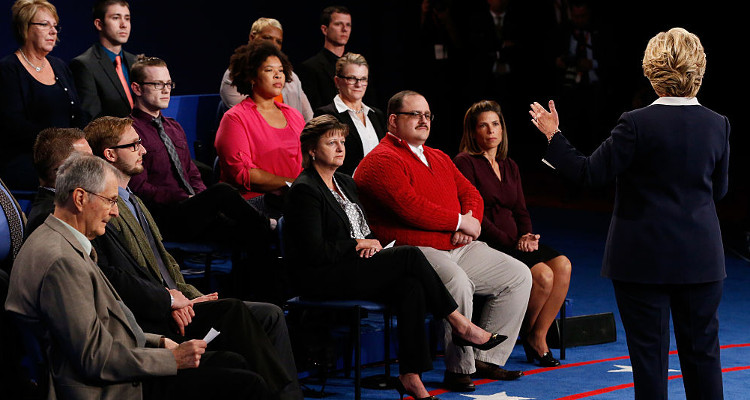 Thanks to the sincere and earnest manner with which Ken Bone asked his energy related question to the two presidential candidates, Bone has become an Internet sensation. He has even made it on to the first page of Reddit! Now, Redditors want an AMA session with Bone. Bone’s popularity has exploded in the last few days, and his red sweater is imprinted on hearts everywhere.

People started watching the second presidential debate on October 9, 2016 assuming that one of the two candidates, Donald Trump or Hillary Clinton, would be the winner. However, after 90 minutes it was clear that the winner was a gentleman in a red fleece sweater named Kenneth Bone or simply Ken Bone. No one knows why Bone became the hero of the evening, but he won more American hearts than either candidate has! Maybe it was his innocence and the seriousness with which he asked his question, or maybe it was the fact that he split the pants of the suit he was going to wear, on his way to the debate! Whatever it is, it’s evident that Bone has become an overnight Internet sensation, and people still can’t stop talking about him. Now, Ken Bone has made it to the first page of Reddit!

In an evening high on cynicism, Bone’s sincere manner and the interest with which he asked his question has made him a hero to millions of people. Since the evening of the debate, he has been tweeted about more than tens of thousands of times! He has also become the inspiration for a number of Facebook pages, many of them with thousands of fans of their own. And let’s not even get started on the many internet memes that have been created based on this fleecy fellow!

He has become so popular that Redditors are now demanding a Ken Bone AMA [Ask Me Anything] session with him! Bone is being described as a person who has become popular because of his confidence [33%], calming demeanor [33%], hugability [33%] and mustache [1%]. Bone’s Twitter account indicates that he is from Belleville, Illinois. Before he asked his famous energy related question, Bone had seven followers [two of them were his grandmother because she got locked out of her account and had to create a new one]. Now, he has more than 7,000 followers and the number is still growing! In the Reddit Pics, Bone has 5,227 upvotes, while in the Reddit comments he has 3,353 upvotes! This shows how popular he has become in such a short time, and it doesn’t look like people are losing their obsession with him anytime soon!

Even celebrities like Chelsea Handler are jumping on the Ken Bone train! (Possibly quite literally, check out the hilarious video below!)

An AMA session with Ken Bone would be really entertaining because he represents a point of view rarely seen these days. An earnest man who still has hope and expectations from the political class of America. In an age where the winds of cynicism blow away almost anybody, Ken Bone is the last man standing, and we love him for it!