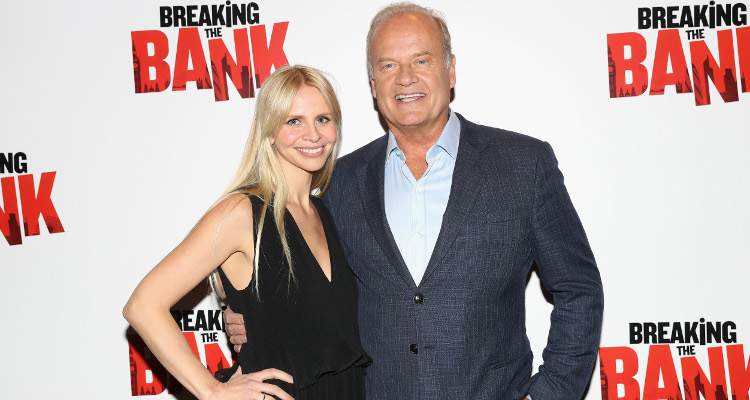 After going through numerous ups and downs in his love life, Kelsey Grammer is now married to Kayte Walsh. The Frasier star is so in love with his wife, as evident from the PDA-packed paparazzi shots.

Grammer’s personal life has been nothing short of tumultuous, from tragic deaths in his family to his alcohol and substance abuse problems. But he has been able to get through his troubles with his current wife’s support.

Kelsey Grammer has been married three times before tying the knot with Walsh. He has seven children from his past relationships, including actress Spencer Grammer.

His first marriage to dancer Doreen Alderman lasted from 1982 to 1990. However, they were separated for most of it.

After their divorce, Grammer had a relationship with makeup artist Barrie Buckner, who gave birth to his second daughter, Kandace Greer Grammer. His second marriage to former exotic dancer Leigh-Anne Csuhany was rife with ups and downs.

Grammer was briefly engaged to a woman before he married former Playboy model-turned-Real Housewife, Camille Donatacci. But he had an affair with Kayte Walsh during their marriage, and they married soon after his divorce with Donatacci was finalized.

Her Father’s a Soccer Player

British-born Kayte Walsh is the eldest daughter of Alan Walsh, a former English soccer player. He spent the better part of his career playing for Bristol City and Darlington and was a record goalscorer. Due to her father’s career, the Walshes moved around a lot.

“When I was three my dad got a contract with Bristol City,” said Walsh, “so we moved to a small town called Clevedon and then to Portishead, on the outskirts of Bristol. Then when I was eight, Dad got a contract to play in Istanbul for two years.”

Kayte Walsh is the second of four children born to Alan Walsh. Her brother, Phil Walsh, followed his father’s footsteps to the field. He played in the Football League for Dagenham & Redbridge and Barnet.

She Was a Flight Attendant

A then-23-year-old Walsh left her job in a bar in France and joined Virgin Atlantic as an air stewardess. Sitcom legend Kelsey Grammer was flying from L.A. to London in a Virgin Atlantic flight in December 2009 where they met.

While she’s familiar with the jokes of flight attendants on the “lookout,” Walsh claims that it was love at first sight when she met Grammer in the upper-class section of the flight.

“I saw him and we looked at each other and smiled. It was like as if he had this golden glow around him. He came and sat at the bar, and we chatted about music and England. I was blown away by how lovely he was.”

Grammer left Walsh his phone number, but she was indecisive about calling him, knowing that he was a married man. So, when he invited her to where he was staying, she asked for a divine confirmation.

“I said: ‘God, if I’m meant to call him, I want a sign. I looked out the bus window and saw a sign reading, Frasier Suites. I was like: ‘OK, that’s not enough.’ Four minutes later, we passed an art store called Crane and a few moments later, we drove past the hotel where he was staying.”

That was all Walsh needed to meet up with him for a coffee.

They Had an Affair

Walsh was on the fence about dating Grammer knowing the actor was married to Donatacci. But on their first date, he told her that he wasn’t happy in his marriage. Their relationship did not progress beyond hand-holding and kissing for several months while Grammer was grappling with his divorce from Donatacci.

Sometimes I miss the seasonal weather changes back east, it makes you appreciate the summer weather. Looking forward to skiing and spending time in the ❄️❄️❄️❄️. Hope everyone is enjoying this holiday season ?⛸⛷?

The breakdown of Donatacci and Grammer’s marriage and his six-month affair with Walsh formed the basis of the drama of The Real Housewives of Beverly Hills season 1. Donatacci found out about Grammer’s cheating on the show when the doorman of their New York residence informed her that “Mrs. Grammer” was already in the house.

Donatacci claimed that the actor ended their relationship via text message. Grammer admitted that he didn’t serve the divorce papers until 2010. Their divorce was highly contentious, with words going back and forth.

Donatacci made allegations about Grammer’s capabilities in the bedroom, and that he was a cross-dresser. While he denied the cross-dressing part, Grammer declared that he was sexually adventurous. He also counter-alleged that Donatacci wanted fame and married him because he was “Frasier.”

Meanwhile, Walsh was uncomfortable with the attention she was getting as the “other woman.” She said that she was not proud of the way her relationship with Grammer started in an interview.

In 2010, Grammer announced that he was going to be a father for a fifth time when Walsh became pregnant. Their relationship raised eyebrows since Grammer was still married to Donatacci, and he was 25 years older than Walsh. However, Walsh had a miscarriage that same year.

In 2011, Grammer married Walsh 15 days after his divorce from the reality star was finalized. Their daughter, Faith Grammer, was born in 2012, and their son, Kelsey Grammer Jr., was born in 2014. Their third child, Auden Grammer was born in November 2016.

Walsh endured difficult pregnancies before her three children were born. Two pregnancies, including the one in 2010, ended in miscarriages, and Faith’s unborn sibling died in utero.

Throughout their relationship, the couple had secret wedding ceremonies, in addition to their 2011 ceremony at the NYC Plaza Hotel.

Grammer credits his current wife for helping him put his addiction problems behind and said, “This lovely young woman lit up my world and changed my heart, which was a bit calloused and hardened against a lot of things. And we are good, and I feel young and alive.”