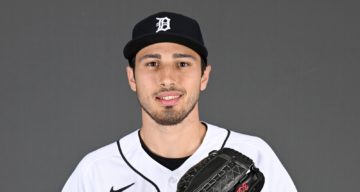 Alex Faedo made his MLB debut this Wednesday when the Detroit Tigers recalled the pitcher for the Pittsburgh Pirates game. On the personal front, Faedo is probably busy planning a wedding. Kelsey Barrett is Alex Faedo’s longtime girlfriend and soon-to-be wife. Their social media followers are familiar with this adorable couple and caught the news of their engagement, too. Barrett is ecstatic about her fiancé’s majors debut, and Tigers fans are enthusiastic about welcoming this WAG to the franchise. New fans want to know more about Barrett and her background. So we have the perfect primer on Alex Faedo’s fiancée in this Kelsey Barrett wiki.

Kelsey Leigh Barrett was born on September 24, 1996. She hails from Atlanta, Georgia, but grew up in Tampa, Florida.

Kelsey has an older sister named Kimberly. Their parents are Alicia Fugati and Shawn Barrett, but they have separated.

Kelsey Barrett graduated from Braulio Alonso High School in 2015 and attended the University of Florida. She studied health education there, including community health promotion.

Alex Faedo has been in a relationship with Kelsey Barrett for almost a decade. The Detroit Tigers selected Faedo in the 2014 MLB draft, but he didn’t sign. Instead, he opted to attend the University of Florida with Barrett and played college baseball with the Gators.

He got his shot at professional baseball again when the Tigers selected him in the 2017 MLB draft. He sat out the first season due to his workload in Florida and began the 2018 season in the minor league.

Kelsey supported him throughout his career. They announced their engagement in November 2021.

The couple has not revealed any wedding plans just yet. Currently, Barrett is celebrating her fiancé getting called up to the majors.