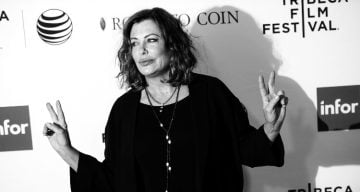 Kelly LeBrock once ruled the world of fashion, and ‘80s movies made her a sex symbol. But this pop culture icon swore off Hollywood for a more secluded life. What happened to Kelly LeBrock, and where is she now?

If you were around in the ’80s, you’ll remember a young Kelly LeBrock flicking her gorgeous hair and saying, “Don’t hate me because I’m beautiful” in a Pantene shampoo commercial that became immortal in pop culture history. The model-turned-actress was the epitome of fantasy women of ‘80s cinema. She’s someone who can’t be forgotten. But Kelly LeBrock left Hollywood behind and disappeared from the spotlight. People are asking, where does Kelly LeBrock live and what is she doing now? Kelly LeBrock left the celebrity world for her family, but she’s now back in front of cameras…for her family. Here’s what Kelly LeBrock is up to now.

Top of the World

The New York-born LeBrock grew up in upscale Kensington, London, but returned to NYC where she began her modeling career at 16. At 19, she became a household name with a 24-page spread in Vogue. LeBrock garnered a contract with Christian Dior and appeared in numerous magazines. Her Pantene commercial turned her into a pop culture icon, making her one of the most sought-after models at the time.

LeBrock turned to acting, where she acquired the image of the “perfect woman” with movies The Woman in Red and Weird Science. As a result of these roles, she became known as one of the sexiest women in Hollywood.

After her first marriage with film producer Victor Drai (The Woman in Red and Weekend at Bernie’s) ended, she met action star Steven Seagal. Romance bloomed between them and they dated. They even starred in films like Hard to Kill together.

After the birth of their daughter, Annaliza, they married in 1987. Their son Dominic was born in 1990 and their youngest child, daughter Arissa, was born in 1993. A year after Arissa’s birth, the couple divorced.

LeBrock is now married to investment banker Fred Steck. After their marriage, LeBrock retired from Hollywood. Saying that she’s happy as long as her husband only has eyes for her, she gave up dieting and stopped trying to keep up with Hollywood’s standards of beauty. Though she controls what she eats and admits to using Botox to keep her skin youthful, she won’t do what makes her unhappy.

Back to the Spotlight

After a long hiatus, the 57-year-old is front of the camera again; this time in the Lifetime docuseries, Growing Up Supermodel. The show follows kids with famous parents who are looking to make it as models.

LeBrock and Seagal’s youngest daughter, Arissa LeBrock, is now 24 years old and aspiring to be a plus-size model.

It appears that Arissa inherited her mom’s no-nonsense attitude when it comes to unrealistic body images and beauty standards. “She’s very upfront and she’s not going to let anyone mess around with her, whereas I was so freaking demure and shy. I allowed all sorts of atrocities [to] happen,” said LeBrock about the troubles she endured, “You know, the typical strange photographers doing not nice things. But my girl is not that girl. I think the way I raised her has been really great. I think she’s not going to have the pitfalls I had.”

The things she went through during her modeling days made for one of the reasons LeBrock packed up and escaped to Santa Barbara. She and Seagal raised their kids “in the middle of nowhere.” The family lived on a secluded farm and had no television. Instead, they learned to track animals and befriended local fishermen and cowboys.

LeBrock enjoyed the gritty farm life, tending to her animals and growing her own vegetables. She loves her secluded life so much that she didn’t want to leave it. So why did she agree to star in a reality series?

For her daughter, of course! “I must have been drunk,” quipped LeBrock, “[But] I did it for my girl… This has actually been really great for [us] to do. It has brought us closer… You would think reality TV is all about knocking people down and drama. But I’ve actually really enjoyed watching Arissa go from the beginning of filming to the end and how much more confident she came out of it. And it’s actually like a documentary of our lives.”

A post shared by borninthewronggeneration (@retrokitsch) on Apr 6, 2017 at 7:13am PDT

For now, LeBrock has no plans beyond Growing Up Supermodel, especially not regarding returning to acting. To persuade Kelly LeBrock to do a movie, it would require a noteworthy script with a special director. Neither does she plan to publish the memoir she has been writing her whole life.

Watch Kelly and Arissa LeBrock on Growing Up Supermodel every Wednesday at 8:00 p.m. EST on Lifetime.