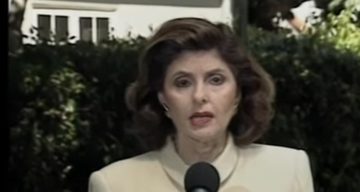 New documentaries on Princess Diana’s death and her relationship with Dodi Fayed have raised some old questions. Kelly Fisher was Fayed’s fiancée and accused him of two-timing her and the Princess.

This August will mark the 20th anniversary of Diana, Princess of Wales’ death. Documentaries continue to explore the unexplained questions surrounding her death that resounded throughout the world. While NBC airs a primetime special on the heart-winning princess, HBO has authorized a documentary on her life from the viewpoint of her sons, Princes William and Harry. At this time, Diana’s last days are a hot topic. Her alleged relationship with Dodi Fayed and his ex-fiancée, Kelly Fisher was quite a scandal. Kelly Fisher created an uproar with her accusations against Fayed. What has become of Fayed’s ex? Where is Kelly Fisher today? Here’s what you need to know from Kelly Fisher’s Wiki.

Who is Kelly Fisher?

In August 1997, a model named Kelly Fisher held a press conference saying she was suing her fiancé, Dodi Al-Fayed, the son of a billionaire businessman, Mohamed Al-Fayed who owned Harrod’s department store. The former Calvin Klein model sported a glittering sapphire-diamond engagement ring given to her by Fayed who, at that time, was the rumored romance of Princess Diana. Her intention was to make sure the Princess knew what kind of man Fayed was.

“We would like the princess, who has suffered greatly in the past, to know of Ms. Fisher’s experiences with Mr. Fayed so that she can make an informed decision regarding her future and that of her children,” her attorney stated to a crowd of cynical journalists. They never revealed Fisher’s age —she was a model after all— as maintaining a model’s longevity as was customary in the ‘90s.

Fayed had proposed to Fisher six months before his death. Upon their engagement, he bought a house in Malibu with money from his father. They were supposed to marry on August 9 that year, until he dumped her for the princess. He literally jilted her at the altar and it was up to Fayed’s father to tell her he had broken it off with her.

She was suing him for breach of contract. The suit alleged Fayed offered Fisher $500,000 for scaling back her modeling career in America and moving to Paris so she could spend more time with him. He claimed that it was embarrassing for the family that the model, who featured on the covers of Elle and W,  was working. He failed to make good on his promises that had her sacrifice her career.

Also Read: Hasnat Khan Today: Where is He Now?

Fisher came to know that Fayed was romantically involved with Princess Diana the same way the rest of the world did, from the famous photo known as “The Kiss,”  where the princess and the heir were spotted kissing on Fayed’s yacht. What we all learned later that Fisher was on another Fayed-owned yacht some distance from them, none the wiser of what happened. When she did, she hotfooted to Hollywood and invited Princess Diana to have a proper conversation about Fayed. The Princess didn’t reply to her invitation and a few days later, she and Fayed died in a tragic car accident in France.

Around that time, Fayed’s ex-wife, Suzanne Gregard, exposed Fisher’s claims. Gregard was also a former model and was married to Dodi Al-Fayed for eight months. When their marriage ended, he had to pay very dearly in the form of money, property, jewelry and a Rolls-Royce. Despite a bitter divorce, they remained friends and she claims Fayed spoke to her about Diana.

When Fisher held her press conference, Gregard’s story questioned Fisher’s claims. The former Mrs. Fayed said she met Fisher a month before Fayed and Diana began their relationship. Kelly Fisher was wearing her expensive engagement ring but told Gregard that she and Fayed had ended things, and that she kept the ring because she “wasn’t an idiot.” That, and Fayed’s reps saying that sapphire ring was a gift and not an engagement ring, effectively killed all sympathy (if any) for Fisher in the public eye.

In 2007, Fisher would dig up old wounds by giving her testimony in the inquest into Princess Diana’s death. In the courtroom, Fayed’s father had painted a poor picture of Fisher, calling her a gold-digger among many choice words. He denied that they were engaged and emphasized that Dodi Al-Fayed and Princess Diana were very much in love. So, Fisher had to get involved in the inquest and once again emphasize she was indeed Fayed’s fiancée.

“Why would I sit here 10 years later when I have a completely new life and lie about being engaged to someone. We were engaged and that is all there is to say about it,” the former Giorgio Armani model said. Fisher also said that she initially rejected Fayed’s advances. But then he showered her with Cartier watches and other expensive gifts, and she was already falling for him. He reportedly treated her staff like a “dictator” during their time together.

Since that 2007 resurgence in the public eye, the slandered model was never heard in the media again. It’s as if she vanished from the face of the earth. Even the many documentaries on Princess Diana didn’t allude to Fayed’s supposed ex-fiancée.

Is Kelly Fisher married? With her lack of public appearance, there’s no information on whether she married someone else or what her personal life is like today. We wonder, with so many new documentaries lined up, will we ever learn about Kelly Fisher’s take on Princess Diana and Dodi Al-Fayed in 2017?