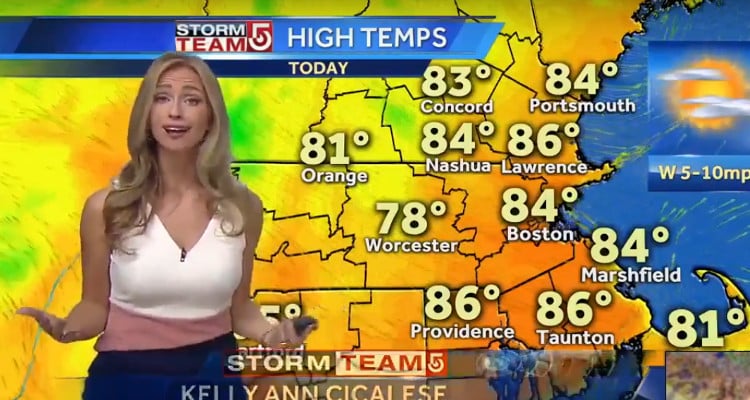 Kelly Ann Cicalese has a passion for helping people. She shows this through her job as a meteorologist and her various philanthropic endeavors. Cicalese risked her life many times by venturing out in extreme weather conditions so that we could know the latest weather updates and be safe.

There is no information about Kelly Ann Cicalese’s age, but we know she grew up in New Jersey along with her younger sister Kathleen, who is now a high school math teacher.

Cicalese graduated from Rutgers University in 2011 with a degree in meteorology. While in college, she was a member of the Rutgers Meteorologists Club. She also holds an Associate of Science from Middlesex County College in mathematics.

Cicalese is happily married to her long-term boyfriend, Edward Davila. Kelly Ann Cicalese’s husband was also in school when the two met and later decided to marry on October 11, 2015. According to sources, they have a happy and successful marriage, and are both a strong pillar of support to the other.

Cicalese is a brave and courageous woman as often covers turbulent weather conditions like thunderstorms, heavy snow, and tornadoes with her hair blowing and microphone in hand. She used to provide live weather reports of the ever-changing weather conditions in the Appalachian region.

She also participated in non-weather-related segments, including interviews, cooking segments, and topic discussions. However, Cicalese is most passionate about reporting on the weather, and often takes risks that others would not to bring accurate live reports to her viewers.

People were happy to welcome Kelly Ann Cicalese to WCVB when she joined them last year. The WCVB News Director welcomed Cicalese saying, “Kelly Ann’s depth of knowledge and experience reporting on severe weather conditions will compliment what is already the strongest team of meteorologists in the Boston Market.”

She was also very excited at this new opportunity and said, “It is such an honor to be joining StormTeam 5 at WCVB. I look forward to the challenge of forecasting in the Greater Boston area, and working alongside well-respected Meteorologists in the industry.”

Cicalese is not only communicates to viewers on TV, but also gets to know them one-on-one. She speaks at various social clubs and conducts children-friendly weather experiments at local classrooms. She also volunteers for Habitat for Humanity.

Not many people know this, but Cicalese has a passion for Irish dancing for which she started training in at a young age. She gave performances at various venues including Carnegie Hall, the PNC Bank Arts Center, and a small Broadway stage.

Kelly Ann Cicalese is not very active on social media, but she does have a Twitter account. In the last few days, she has been tweeting the latest updates on Hurricane Irma. She is very interested both from a professional and personal point of view.

It is unlikely that fans will be able to get Kelly Ann Cicalese’s hot pics, as she guards her privacy fiercely and is always focused on her work. When it comes to telling us the latest weather conditions, remember that Kelly Ann Cicalese is our all-weather friend!