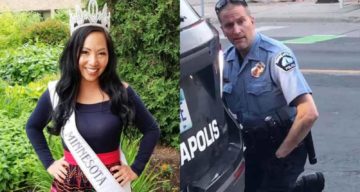 George Floyd’s tragic death has turned the public’s attention and outrage on the officers involved, and their families. Kellie Chauvin is married to Derek Chauvin, who’s now fired from his job as a Minneapolis police officer after using fatal force on Floyd as seen in the harrowing, viral video. The Internet is digging deeper into the background of Derek Chauvin’s wife, including speculating a possible connection between her and another officer involved in Floyd’s death. Her past comments about her husband that seem to contradict the man seen in the video are making the rounds of the Internet. Our Kellie Chauvin wiki has more insight about the woman married to the disgraced police officer.

Kellie Chauvin Is from Laos

Kellie Chauvin was born on October 21, 1974 in the Asian country of Laos, barely a year before the 16-year-long civil war there ended. She is of Hmong descent, an ethnic group native to Laos, Vietnam, and Southern China.

For most of her childhood, Kellie lived the life of a refugee. Her family left Laos when she was three and went to Thailand in 1977. To this day, Kellie avoids oatmeal, because it reminds her of the time she stayed in a refugee camp in Thailand until 1980.

In October 1980, her family made it into the U.S. and settled in Eau Claire, Wisconsin. Kellie started her formal education in kindergarten in 1984. At that time, her younger classmates were far better in English than she was.

Her Hmong ethnicity has been a big part of her life. Kellie was bullied for her looks and called ugly as a child. But she overcame that. She’s still true to her roots, being a major donor to non-profit Hmong organizations.

On the suggestion of a friend, Kellie competed for the title of Mrs. Minnesota 2019, becoming the first Hmong woman to win that honor. She wore a navy blue evening gown for the pageant as a homage to Derek Chauvin’s profession.

Exciting News ! I have been named this year's 2019 Grand Marshal of the Oakdale summerfest Parade. I will be…

Kellie Chauvin Has Children from a Previous Marriage

According to Kellie, Hmong parents believe if their daughter is not married by the time she is 18, she will never get married. That’s how she ended up married at 17 to a man she barely knew. That was her first marriage.

Living in Florida, the couple had two children, including a son George Xiong. However, their marriage wasn’t without problems.

Kellie tried to make her marriage work, but she couldn’t stay in what was an abusive relationship. So, after 10 years, she got divorced and moved to Minnesota with her children. Her ex-husband died shortly after the divorce.

Soon after her divorce, Kellie set out to carve out a career for herself. That led to her getting an associates degree in radiology.

Kellie got an internship in the emergency room of Hennepin County Medical Center in Minneapolis. She secured a full-time position there and continued working there for 13 years.

After marrying Derek Chauvin, Kellie left her job and went to Kaplan University in Iowa, where she learned the residential real estate business. She now works as a realtor at Re/Max Results.

When Kellie was working at the Hennepin Medical Center, she met Derek Chauvin who was a police officer in Minneapolis. He had brought in a suspect for a health check before an arrest when he saw her. After taking the suspect to jail, he returned to ask her out.

“Under all that uniform, he’s just a softie,” Kellie said. “He’s such a gentleman. He still opens the door for me, still puts my coat on for me. After my divorce, I had a list of must-haves if I were ever to be in a relationship, and he fit all of them.”

They married in 2010 and were together since. Now Derek Chauvin’s wife is in the spotlight since the death of George Floyd.

Twitterati is pointing out the glaring difference in the Derek Chauvin Kellie talks about and the one they see with his knee on Floyd’s neck. Kellie has deleted her social profiles since the incident.

Chauvin has been fired for his excessive use of force that caused the death of Floyd. Three other police officers involved in the incident were also fired.

A rumor on social media claims that one of those officers, Tou Thao, is Kellie Chauvin’s brother and therefore, Chauvin’s brother-in-law. However, there’s no proof of the same and most sources claim that the four officers involved aren’t related.

On May 29, it was reported that Kellie filed for dissolution of marriage to Chauvin. In a statement on behalf of her family, she expressed her solidarity towards Floyd and his family. She also requested to protect her family’s privacy and safety.

Social media users have supported Kellie for taking this decision. Those who know her have conveyed that she is a kind woman who has nothing do with George Floyd’s tragic death and doesn’t deserve to be held accountable for Chauvin’s actions.