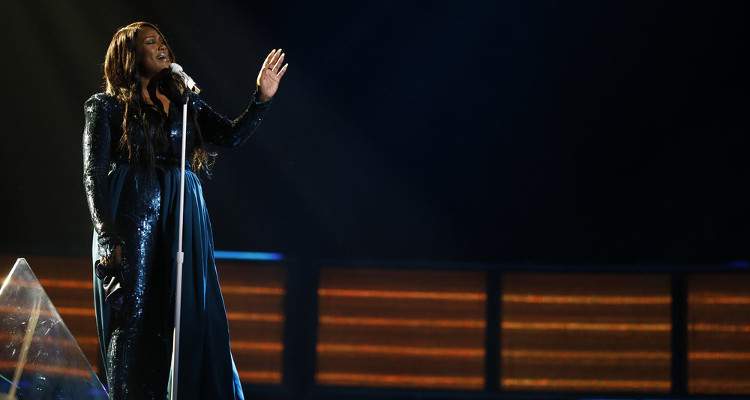 Keisha Renee began singing in church at a young age and realized that she wanted to be a singer. After growing up, Renee went to Houston, Texas, where she fell in love with country music. She is now in the Top 10 of The Voice season 13 on NBC with Blake Shelton as her coach. Read all about this aspiring country music star in Keisha Renee’s wiki right here.

When Keisha Renee sang “All By Myself” on The Voice season 13, the judges and the audience sat in stunned silence. Renee sang her high-pitched version of the song originally sung by American singer Eric Carmen and later covered by several artists, most notably Canadian singer Celine Dion.

Renee’s performances throughout the competition, and particularly her performance on the Top 10 stage, has made her among the front-runners to win the top prize at The Voice season 13 competition. People are lining up to hear her sing and they want to know more about her.

In Love with Country Music

Renee grew up singing in church, and after completing her schooling, she moved to Houston, Texas, where she discovered and fell in love with country music. She has been a professional background singer for eight years and spent five of them singing backup for Nicki Minaj!

I will forever be grateful to @nickiminaj who allowed me to grow in her space. I would have moments on stage I imagined the crowds were there just to hear me sing. Look at where God has brought me. #BLESSED?❤️? . . #YourFavoriteBGV is #10Spots away from officially being #YourFavoriteArtist #TheKReneeJourney . #TheVoice #TeamBlake #TeamKeisha #Season13 #VoiceTop10 #CountryMusic #CountryPopSoul #nickiminaj #concert #vibes #blessed #humbled #selfie #follow #share #instagram #vsco

Even though Renee fell in love with country music, it was very difficult for her to pursue it because many people told her that her voice was better suited for pop and R&B.

The Birth of Her Daughter Changed Everything

Touring with Minaj was a fantastic experience, and Renee learned a lot, but she had to completely change her lifestyle when her daughter Amari was born. Renee had struggled with her weight all throughout her life, and after the birth of her daughter, the problem became worrisome.

During her pregnancy, Renee weighed 356 pounds and was diagnosed with diabetes. She says that the diagnosis and the birth of her daughter was the wake-up call she needed to change her life.

You may see it as just a smile! For me it’s a moment of acceptance of my calling. It’s when people you admire began to see you as a peer. It’s when young women see you as a role model. It’s when your daughter see you as the hero. This is my journey❤️ . . . @nbcthevoice #Top11 #TeamBlake #TeamKeishaRenee #CountryMusic #CountryPopSoul #Share #Season13 #YourFavoriteBGV is #11spots away from officially being #YourFavoriteArtist #dream #amazing #blessed

Since then, Renee has shed much of her excess weight, and now she is all set to achieve her goal of becoming a bona fide country music star. And now that she has country legend Blake Shelton as her coach in The Voice, she is closer to her realizing her dream than ever before!

Front-Runner for the Top Prize

There aren’t any details about Keisha Renee’s family history. We also can’t comment on her relationship status as we can’t find any information on Keisha Renee’s boyfriend.

Enjoy your victories, but then ask yourself what’s next! For me it’s on to the next @nbcthevoice LIVE SHOWS! Can’t wait for you to hear this song I’m working on…??Yes Lawd!!!!! Tune in Every Monday & Tuesday 8/7c @nbcthevoice #Top11 #TeamBlake #TeamKeishaRenee #CountryMusic #CountryPopSoul #Share #Season13 #YourFavoriteBGV is #11spots away from officially being #YourFavoriteArtist

Renee is a very social person and loves to spend time with people when she is not singing, and she’s quite active on social media, too. You can find plenty of Keisha Renee’s Instagram pics on her account. There are also pictures of her singing and having fun; spending time with her daughter, the other contestants of The Voice season 13, and the judges—especially Blake Shelton.

Now that Renee is so close to the top prize, she is giving it everything she’s got. So, don’t be surprised if Keisha Renee emerges as the winner of The Voice season 13 competition!