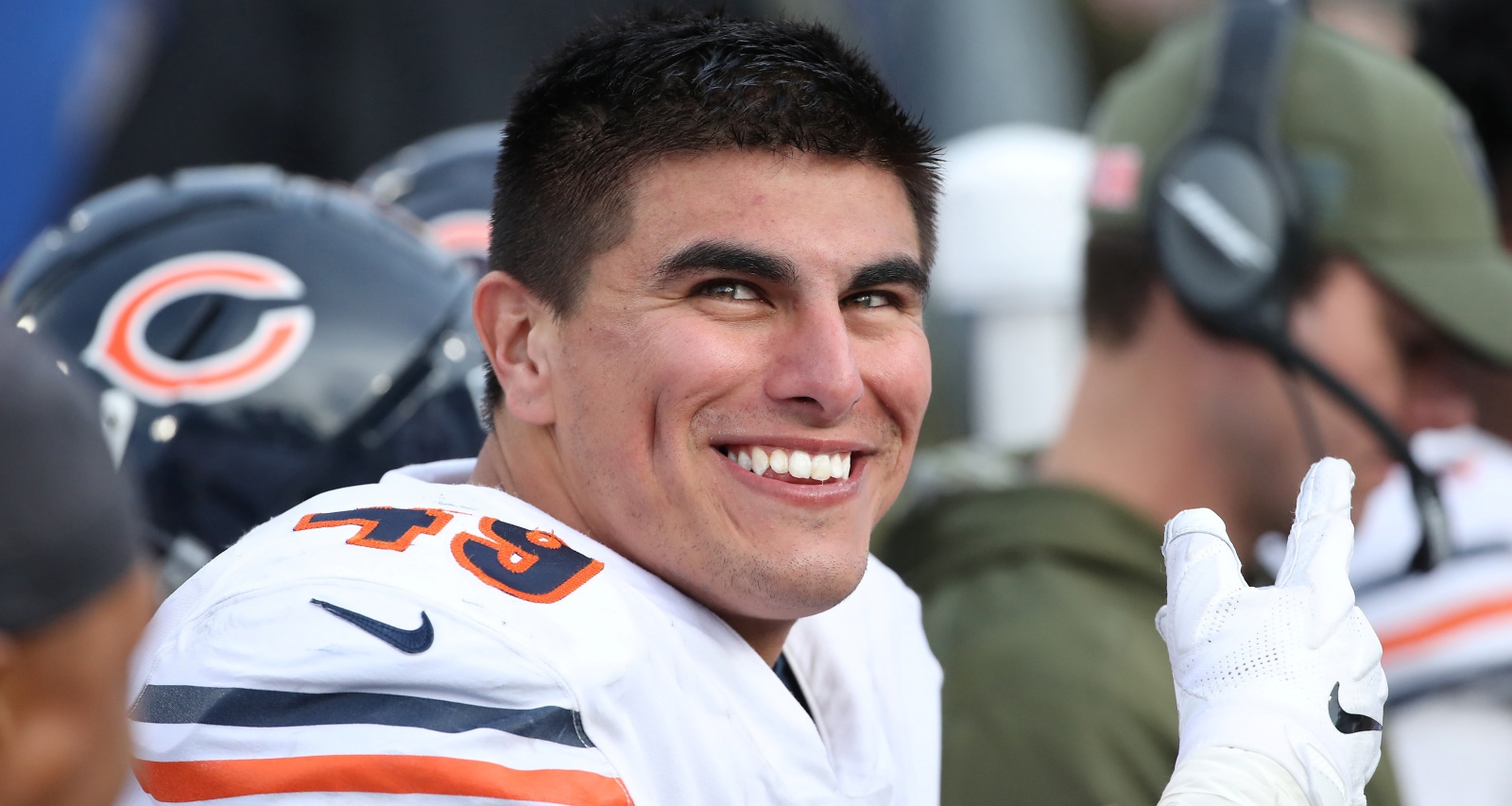 Kylie Fitts #49 of the Chicago Bears smiles as he looks on from the bench during NFL game action against the Buffalo Bills at New Era Field on November 4, 2018 in Buffalo, New York. (Photo by Tom Szczerbowski/Getty Images)

After four seasons in the NFL, Arizona Cardinals linebacker Kylie Fitts retired from football at the age of 27 in April 2022. He made the decision to conclude his injury-ridden athletic career after suffering multiple concussions. Among the fans, colleagues, and loved ones who supported him, Kylie credited his wife for being his backbone. Kylie Fitts’ wife, Kaylina Fitts, was with him as he dealt with the physical consequences of a contact sport. At the same time, Kylie has shared the story of their growing family and what an inspiration Kaylina is. We reveal more of her background in this Kaylina Fitts’ wiki.

Kaylina Droke was born on August 24, 1993, and hails from California. She has apparently resided in different states due to her father’s job in the military.

She is the daughter of Angela Duran and Muriel Droke. Her parents are divorced and her father remarried to a Wendy Droke. Kaylina has a little sister, too.

Kaylina’s father Muriel served as an Army staff sergeant and is an Iraq war veteran. He overcame a traumatic brain injury and PTSD to return to full duty. Before her husband, Kaylina probably witnessed what traumatic injuries can do to a loved one.

The erstwhile Kaylina Droke was a student at Fountain-Fort Carson High School in Colorado in 2011 when she met then-First Lady Michelle Obama and current FLOTUS Jill Biden. Obama and Biden visited the military families at the school to deliver a $300,000 grant and words of wisdom. Kaylina even got to hug both inspiring ladies.

Inspired and starstruck by Obama and Biden, Kaylina went on to attend the University of Utah in 2013. She received her degree in consumer and community studies, human development and family studies, in 2019.

During Kylie Fitts’ brief stint with the Chicago Bears, Kaylina was working in Illinois. She was a student intern at Vernon Hills High School.

Kylie Fitts and Kaylina Droke have been together since 2015, when they were students at Utah. The linebacker was selected by the Chicago Bears in the 2018 NFL Draft and was signed by the Arizona Cardinals the following year. After getting engaged in 2019, Kaylina Droke and Kylie Fitts married on July 7, 2020.

Kaylina has Mayer-Rokitansky-Küster-Hauser (MRKH) syndrome and was born without a uterus. The couple opted for IVF and surrogacy to have children shortly after their wedding.

Both Kaylina and Kylie have shared the IVF process on their official social media, inspiring and encouraging several couples struggling to have their own children. After finding a surrogate, who underwent a successful procedure, the newlyweds were overjoyed to find out they were expecting twins.

However, they received grim news during one of the check-ups that one of the twins might not be able to make it. They took consolation in the fact that one of their babies would be born healthy. Fast-forward two weeks, and the Fitts babies surprised their doctors and parents when both babies were growing and healthy.

Their twin girls, Marilyn “MJ” Julietta and Grace Kyley, were born on January 27, 2022. MJ is named after their respective grandmothers. They named their little fighter Grace, as she survived and arrived in the world against all odds, and her middle name, Kyley, is from the surrogate.