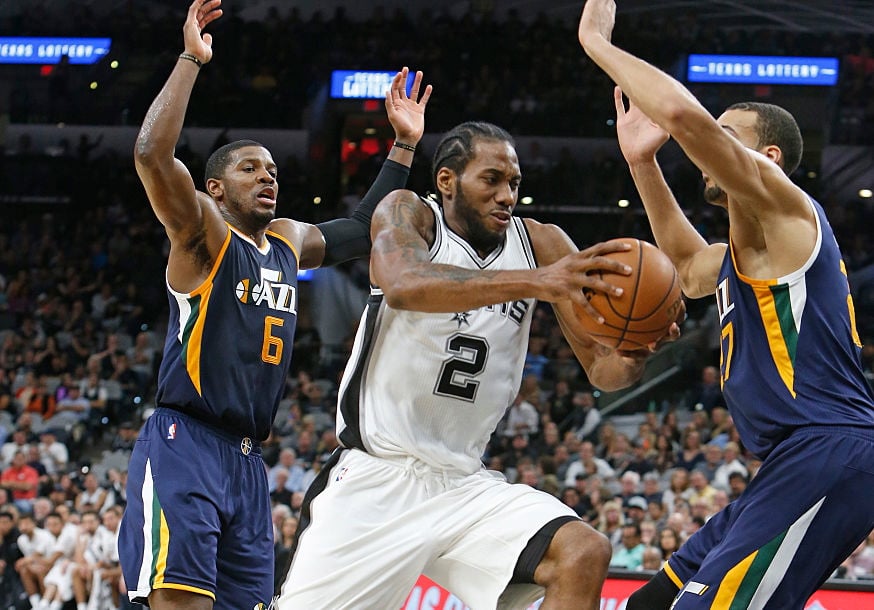 Five years ago, San Antonio Spurs coach, Gregg Popovich labeled the rookie, Leonard as the future face of the franchise. During his time in the NBA, he’s been overshadowed by other players . . . but not anymore. Now, in the early part of the NBA’s sixth season, Leonard could turn out to be the face of the entire league! Players like Stephen Curry sets records and stretches the limits of the 3-point shooting game. LeBron James is soon to be 32 and is pacing himself for his 14th NBA season to defend a title. Several other players have made names for themselves as not only professional athletes, but as sports celebrities. Then there’s Leonard—striving to move up in the ranks. If you want to know more about the possible “MVP candidate,” Kawhi Leonard’s girlfriend and more, check out our Kawhi Leonard wiki right here!

Born June 29, 1991, Kawhi Anthony Leonard “just keeps getting better,” according to Jazz coach, Quin Snyder. “People talk about him being an MVP candidate and that’s right on,” he added. Leonard’s passion for the sport goes back to his high school days when he first began playing for Martin Luther King High School’s basketball team. Kawhi Leonard’s stats included an average of 22.6 points, 13.1 rebounds, 3.9 assists, and 3.0 blocks per game! This led him to win California Mr. Basketball and become the No. 8 small forward and the No. 48 player in the nation in 2009. Kawhi Leonard’s height is 6 ft. 7 in.

Kawhi Leonard’s college days were when he really took off. In his freshman season, he averaged 12.7 points and 9.9 rebounds per game and led the Mountain West Conference in rebounding. He was awarded the titles of MWC freshman of the year, 2010 MWC Tournament MVP and the first team All-MWC. In his sophomore year, he and his team, the Aztecs, made the NCAA tournament again from the previous year. Leonard was named the second to team All-America and decided to pass on his final two seasons at San Diego State University to enter the NBA draft for 2011, This is where he was selected the 15th overall pick by the Indiana Pacers at first. However, he was traded that same night to the San Antonio Spurs and after the NBA lockout, he signed a multi-year deal with the Spurs. Since then, he’s been blowing people away in the NBA! He won an NBA championship with the team in 2014 and was thus named the NBA Finals Most Valuable Player. He’s also a two-time NBA Defensive Player of the Year, winning in both 2015 and 2016!

Kawhi Leonard’s net worth is estimated around $12.0 million. The number is expected to rise significantly, as he continues to get paid during his $94.3 million contract signed in 2015 with the Spurs. Kawhi Leonard’s salary is averaged at $18.8 million. Kawhi Leonard’s age is 25 and the star is already turning into a world class athlete.

If you’re searching for Kawhi Leonard’s wife, the star athlete is not yet married. Several reports say he is dating a woman named Kishele Shipley and the couple have one child together. Kawhi Leonard’s baby was born in July, 2016, shortly after his birthday.

Congrats to Kawhi Leonard..expecting his first child (a girl) in July. Welcome to fatherhood #Spurs pic.twitter.com/C4b50LgPhA

Family is very important to Leonard. When he was a junior at Riverside King High, his father was killed in a fatal shooting a Compton car wash. The day after, Leonard had to play, and fought back his emotions during a pre-game moment of silence. He scored 15 points before finally breaking down in his mother’s arms at Pauley Pavilion. “He played like nothing ever happened the rest of the year,” recalled his high school coach, Tim Sweeney Jr. It seems the sport was Leonard’s refuge. “We’ve never had a guy that’s put more gym time in when nobody’s watching, when it’s not required,” San Diego State coach Steve Fisher said to the LA Times. Many have noticed the basketball star has got some pretty serious ink on his arm! Kawhi Leonard’s tattoo is a tribute to his father. The tattoo is on his right arm—a tombstone with “R.I.P. Dad” written on it, with angel’s wings flowing out from each side.