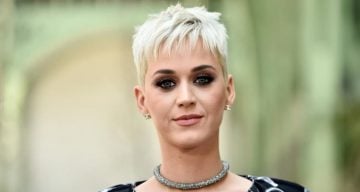 Besides her record-breaking Superbowl performance, Katy Perry has been flying under the radar since the release of her 2013 album, Prism. Despite that, the singer was named as 2015’s top-earning woman in music, as well as the highest-paid female celebrity. Meanwhile, currently on vacation in Disneyland, Perry took the time to share her location with followers who misunderstood it as her birthday!

The 31-year-old posted a photo of her cup of coffee, which had “33” written on it. The image not only got 250,000 likes so far, but also had hundreds of Instagram followers wishing Perry a Happy Birthday. Some even wrote long, inspirational messages about how the “I Kissed a Girl” singer inspires them daily. However, another fan of hers put forth a bizarre theory, “Ya all are dumb, that’s the 33rd coffee she just had [sic].”

But the significance of “33” was sort of obvious to others, as Club 33 is a private club in the New Orleans Square part of Disneyland. It is an exclusive, albeit well-known club, which is the only place in Disneyland that serves alcohol.

In a second post, Perry shared a photo of herself wearing a bright yellow beanie and a fur scarf that covered most of her face, alongside a Cinderella impersonator. In the caption, Perry wrote, “I reminded @cinderella that all this ends at midnight, she was not thrilled. [sic]” Her fans noted that while Perry looked good as usual, the Cinderella did look a bit odd. One wrote, “Cinderella looks constipated,” while another said, “But that Cinderella look creepy lol [sic].”

In the meantime, Perry is also creeping in on the Kardashian’s territory by launching her own app called “Katy Perry Pop.” Along with advice for aspiring singers, the Grammy-nominated artist allows players to venture into the virtual world of music via the app. It even gives them the prospective of being discovered by Perry and being signed to her recording company. Impressive!