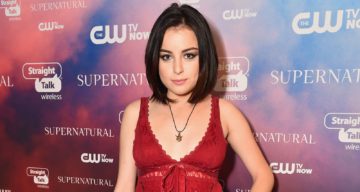 The trailer for Annabelle Comes Home shows that Katie Sarife is a magnet for the paranormal. The young actress is set to make her feature film debut in a lead role in the Conjuring Universe. But we’ve seen her get into some other supernatural trouble on-screen. This actress is going places and we’ve got Katie Sarife’s wiki to catch up with this rising starlet.

Katie Sarife Is from Texas

Katie Sarife was born on July 1, 1993 in McKinney, Texas. She is one of four children born to Shelly Miller Sarife and Katie’s father, Fernando Sarife.

Happy birthday to the most wonderful girl I've ever known . I would not be the actor / the activist/ or even better -the person I am today- if it weren't for her. We've through so much growth together -traveled the world — and have had our shares of highs and lows . It's been such a wild ride and I can't wait for more experiences with this soul . Wish her a good one folks xx

Her family still resides in Texas, while Katie is pursuing her acting career in California.

Katie made her acting debut in 2011 in the teen comedy TV movie, Teen Spirit. She then had minor roles in several TV shows and movies, including the Disney original, Zombies and Cheerleaders. (If you notice, her body of work has a certain running theme.)

That was soon followed with a role in an episode of Supernatural in 2014. Not only did Katie get into some adventures with Sam and Dean, she even sang in the episode. So we know she’s blessed with a Supernatural voice, too.

She had other supporting roles on TV before catching one of her bigger breaks on Disney’s Girl Meets World as Marly Evans. She later starred in the YouTube Red miniseries Youth & Consequences in 2018.

After making a mark on several TV and web series, Sarife is set to make her feature film debut in Annabelle Comes Home, the seventh movie in the Conjuring Universe.

This time, paranormal investigators Ed and Lorraine Warren (Patrick Wilson and Vera Farmiga) bring the cursed doll, Annabelle, to their home to find a solution to its evilness. But the doll targets the Warrens’ daughter, Judy (McKenna Grace), and her babysitters played by Madison Iseman and Katie Sarife.

As we see in the first hair-raising trailer for the movie, Sarife lets the doll loose in the home when she fiddles around with all the cursed objects in the Warrens’ residence. Her fans are already suggesting she call Sam and Dean to rescue her from her new supernatural problem.

She Is Dating Actor Tyler Steelman

Sarife has been in a relationship with California native Tyler Steelman since at least 2014. Tyler is also an actor, who’s best known for his appearances on The Suite Life of Zack and Cody.

The cute couple look so in love in their Instagram posts where they share snapshots of their romantic escapades, including their many travels together.

She’s an Animal Lover and Vegan

Both Katie and her boyfriend Steelman love animals and follow a vegan diet. The couple are also furbaby parents to a dog named Murphy. Murphy even has his own Instagram account.

Besides following a vegan lifestyle, Sarife also spreads awareness about animal rights on Instagram. Sarife has a shop on Etsy where she sells her plant-based art and crafts as well.