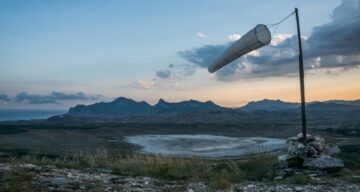 People of Siouxland have loved the unique and detailed weather forecasts by Katie Nickolaou for three years. And they are in awe of her funny and viral TikTok videos. However, Katie Nickolaou is leaving KMEG in October 2022. This announcement came two days after the meteorologist won an Emmy Award. Naturally, people were perplexed by the announcement. They especially want to know where she is going next and if her new job will take her away from the city. Fortunately for them, the meteorologist answered most of the queries about her departure from KMEG.

Katie Nickolaou was born and raised in Battle Creek, Michigan. She saw a tornado when she was five years old. And ever since then, she’s been fascinated by books about the weather, tornadoes, and snow.

Nickolaou earned a BS in Meteorology, with a minor in digital media, from Valparaiso University in Indiana in 2019. Before that, she interned with Michigan’s WOOD TV8 in 2017 and WWMT-TV in 2018. The meteorologist was one of the youngest news directors in the history of Valparaiso University Television.

After graduation, Nickolaou got her first job at KMEG as a morning meteorologist for Siouxland News at Sunrise. Recently, she won an Emmy for her TikTok video on Tacos vs. Tornadoes. Katie is also the creator of Fandom Forecast, a project she started to bring together her love of pop culture and weather forecasting.

Sioux City residents have mixed emotions as Katie Nickolaou is leaving KMEG. This is her final week working at Siouxland News and her last day is October 21, 2022. Furthermore, she has accepted a new job as a weekday morning meteorologist at a station significantly closer to home.

The meteorologist has not revealed the name of her new employer yet. And she sees this as a significant advancement toward her ultimate career goal of becoming a chief meteorologist.

Moreover, Katie Nickolaou has promised to make many  TikToks at her new station, even more than before. And she plans to interact with her followers through her Facebook page.