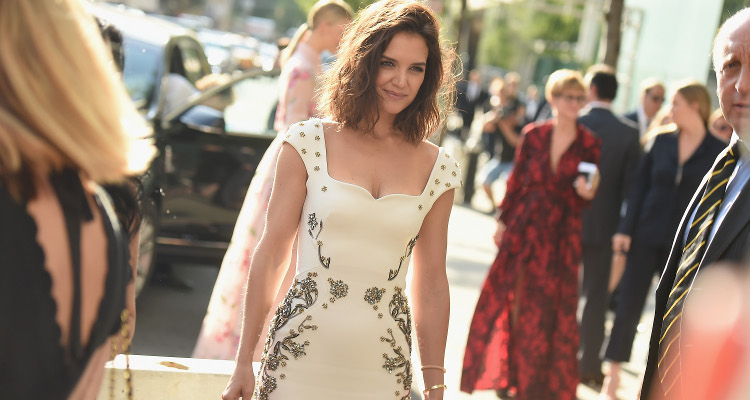 Katie Holmes and Jamie Foxx were spotted holding hands while walking on the beach, sparking questions of whether or not the two are secretly dating. After both actors denied relationship rumors in the past, Holmes might be ready to give in to the media. With Katie Holmes’ net worth of $25.0 million and a possible new man by her side, she is unstoppable!

Katie Holmes’ divorce settlement from Tom Cruise in 2012 was apparently not as much as we expected. She went easy on Cruise’s wallet and settled for child support for their daughter Suri. Though she chose not to pocket more from Cruise’s $550.0 million, she was glad to be away. Since her divorce, the actress was not romantically linked to many people. However, Katie Holmes and Jaime Foxx have been rumored to be dating for quite some time. After denying it for what feels like forever, it looks like the two are finally able to come clean about their relationship! Here is everything you need to know about Katie Holmes’ net worth and settlement.

It was a surprise when Tom Cruise and Katie Holmes, a couple who were seen as a tight-knit family, decided to get divorced. They are two of the biggest stars in Hollywood, and Tom Cruise was about to release Jack Reacher at the time. The very public divorce blew out of proportion in the media, and everyone wanted a piece of the action while the couple were battling it out in court.

The main reason Katie Holmes had for walking out of the marriage was a fear she developed about Suri being involved in Scientology —something Cruise is a vocal follower of. Part of the church’s beliefs is a disconnection policy where people still connected with the faith are not allowed to be in contact with someone who leaves Scientology, even if they are family members.

Cruise is a public supporter of the church, and looking at his history with ex-wife Nicole Kidman, who lost contact with her children for years after leaving Scientology, Holmes was afraid for Suri. She said she did not want to go through what Kidman did, and hoped to have a better relationship with her daughter.

According to their divorce settlement, Katie Holmes got no spousal support, but received child support, though it was not as much as it could have been. She reportedly receives $400,000 a year, amounting to $33,333 per month. Cruise also agreed to pay for Suri’s dental, education, insurance, medical, college, and additional costs until she turns 18, which ends up being a total of $4.8 million.

A clause in the settlement mentions not sending Suri to a school abroad. They set up a trust fund for their daughter, which will keep her more than comfortable once she is entitled to it.

The high profile pair allegedly have another dating clause in the settlement that Holmes was to adhere to, saying she cannot publicly date someone for five years. She was allowed to move on from Cruise, just as long as she kept her relationship under wraps.

FINALLY! We have exclusive proof that confirms that Katie Holmes and Jamie Foxx ARE in a relationship ❤️ After years of hiding their feelings in public due to a clause in her divorce from Tom Cruise that ‘blocked her from dating publicly’, the two were photographed walking hand in hand on the beach in Malibu. They look so happy to finally share their love with the world! ☺️ (Credit: DOBN/RMBI/Backgrid)

This could be one of the reasons why Holmes has been tight-lipped about dating Foxx, as the rumors started way back in 2013. Is it just a coincidence that the two were spotted holding hands recently —five years after her divorce was finalized? Maybe! But currently, we are sure that all eyes will be on the couple, hoping they slip up soon.

But will Jamie Foxx, 49 and Katie Holmes, 36, finally announce their relationship? Or are they actually “just friends?” She was seen with him at a Barbra Streisand concert, and was at his birthday bash. Though it is possible that nothing romantic is going on between these two, it could be possible that there could be something more!

Katie Holmes’ Net Worth and Movies

Katie Holmes began her career with Dawson’s Creek and became an instant fan-favorite. She then went on to appear in movies like The Gift (2000), Abandon (2002), First Daughter (2004), Batman Begins (2005), Jack and Jill (2011), and most recently Logan Lucky (2017). She earned a name for herself in Hollywood for her roles in rom-coms, and now, Katie Holmes’ net worth is estimated to be $25.0 million. Here is how that amount breaks down: