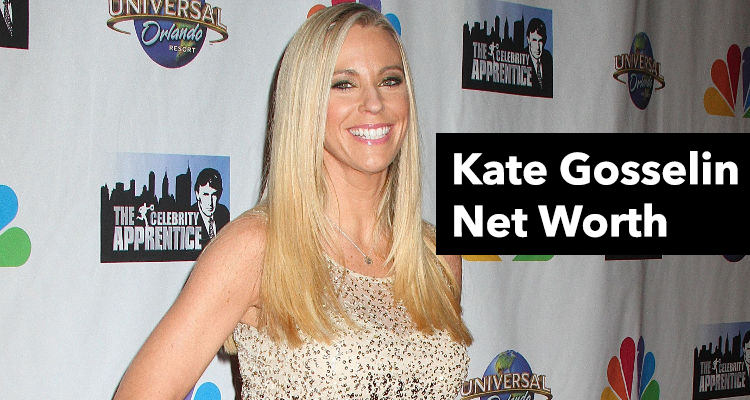 If you are wondering what Kate Gosselin has been up to, don’t sweat over it. We will bring you up to date. Though known primarily for her TV show, Jon and Kate Plus 8, Gosselin has now become a bestselling author, as well.

Since the release of multiple books, her reality TV shows starring herself and her kids and the whole “Kate dating millionaire, Jeff Prescott” thing, people are asking, “What is Kate Gosselin’s net worth?” It’s actually only $0.2 million according to some sources, but latest reports suggest that Gosselin is completely broke!

At least that’s what Gosselin has been saying in some of her recent TV appearances. The road ahead looks a little rough because Kate Gosselin’s boyfriend Prescott split from her last year. And with him gone, so is his millions.

Gosselin achieved fame because she and ex-husband Jon were given their own reality TV show, Jon & Kate Plus 8, where they raised their eight children. She had twins first and then sextuplets. That’s two, plus six more at one time, making that eight children running around the house in constant need of attention! Well, it certainly made for great reality TV! Gosselin became pregnant using fertility treatments since her body could not conceive on it’s own. After twins, the couple tired for one more -and instead got six! The young couple (who aimed for three kids) got more than they bargained for and TLC decided to film the couple’s daily (more than hectic) lives. Their suddenly large family marked the beginning of one of the most popular reality television series, Jon & Kate Plus 8.

After the birth of the sextuplets, Gosselin, Jon and their eight children were featured in the NBC reality show, Home Delivery. Kate Gosselin’s house was renovated to accommodate the large family. They appeared in a couple of shows after that, but they struck gold with the show, Jon and Kate Plus 8, which aired on Discovery Health. They were filmed for 3-4 days every week. They received payment to appear on the show, which was later shifted to The Learning Channel [TLC] and picked up for multiple seasons afterward.

Things went bad in 2009, when Jon and Kate decided to divorce. Kate Gosselin’s kids got to stay with her and a new show, Kate Plus 8 began. By this time, the twins were tweens, the sextuplets were in grade school, and Jon had completely left the show. After a couple of seasons, the show was taken off the air. Gosselin struggled to raise the kids on her own after that, since the money flow seemed to have dried up. Raising eight kids single-handedly is no joke. She appeared on Dancing with the Stars and there were rumors that she would appear on The Bachelorette. So far, it has not happened but the show’s makers admitted that it would be interesting if she did appear on the show!

By now Gosselin had a lot of life experience and she decided to become an author. She has written four books so far, namely Multiple Blessings, Eight Little Faces, I Just Want You To Know and Love Is In The Mix. Her first three books all appeared on The New York Times bestseller list and sold very well.

Her personal life was also not settled. She was linked to her bodyguard, Steve Neild before she started a relationship with millionaire, Jeff Prescott. People are curious to know, “Who is Kate Gosselin dating now?” Sadly there is no information on that. The only thing that is confirmed is that Gosselin and Prescott split up last year, and he’s moved on with a 26-year-old business student. Ouch!

People often wonder how Gosselin manages to raise her eight kids alone. What they don’t know is that Gosselin is a trained nurse. She completed a diploma program at the Reading Hospital in Reading, Pennsylvania. She then worked as a labor and delivery nurse at Reading Hospital for several years. Gosselin is working hard on her show Kate Plus 8 and doubling back as a mother to her eight children. She has more on her plate than she can handle, so go easy on her!