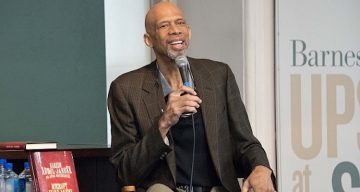 Basketball legend, Kareem Abdul-Jabbar recently announced his 12th book, Coach Wooden and Me: Our 50-year Friendship On and Off the Court. In his book, he gives a glimpse into his personal growth, as well as the story of his personal relationship with his coach, John Wooden. He speaks about racial incidents that occurred during his life and basketball career, and how he sees a connection between what he and other high-profile black athletes dealt with in the ’60s and ’70s as well as Colin Kaepernick’s current predicament. If you want to learn more about the six-time National Basketball Association (NBA) championships and Most Valuable Player (MVP) awards winner, keep reading our Kareem Abdul-Jabbar wiki.

The basketball icon we know today as Kareem Abdul-Jabbar, was born Ferdinand Lewis Alcindor Jr. on April 16, 1947 in New York. Considered one of the greatest players in all of NBA history, his talent has been celebrated since he was in high school. He now stands 7’2” and is a retired center. When he was only nine years old he stood 5’8” and by the time he was in eighth grade, he had grown another full foot! His skills on the court were undeniable because of his talent and the advantage of his height. During high school, he set scoring and rebound records while also leading his team to 71 consecutive wins and three straight city titles. He graduated in 1965 and enrolled at the University of California-Los Angeles. He quickly became the college game’s best player, under coach Wooden’s wing. He led the Boston Bruins to three national championships between 1967 and 1969, and was dubbed the National Collegiate Athletic Association Tournament’s Most Outstanding Player for those two years.

He Changed His Name

He began his career as a professional basketball player in 1969 when the Milwaukee Bucks selected him with the first overall pick in the NBA draft. He quickly adjusted and finished second in the league in scoring, and third in rebounding, earning the title of Rookie of the Year. In 1971, he won the first of six MVP awards he received during his long standing career. Despite his success, he struggled to feel at home in Milwaukee. “I am a soldier hired for service and I will perform that service well. Basketball has given me a good life, but this town has nothing to do with my roots. There’s no common ground,” he said in an earlier interview.

It was shortly after the season ended that he converted to Sunni Islam and changed his name to Kareem Abdul-Jabbar, which roughly translates to “noble servant of the mighty god.”

The Switch to the Lakers

Since Milwaukee was no longer a good fit for Abdul-Jabbar, the Bucks traded him to the Los Angeles Lakers. Culturally and socially, this was a better move for the generation’s next legendary center. Before his third season with the Lakers, he already won his fourth and record-tying fifth MVP awards. But when Earvin “Magic” Johnson was chosen as the first overall pick in the 1979 NBA draft, an incredible dynasty began to take form with Abdul-Jabbar at its core. The Lakers became the most dominant team of the ’80s, winning five NBA championships, and appearing in eight finals.

How Many Rings Does Kareem Have?

Even though Abdul-Jabbar was past his prime, he continued to carve his name in the league record books. He won his sixth MVP award in 1980, and stole the spot as the NBA’s all-time scoring leader in 1984. After 20 seasons, he retired in 1989, and had a total of 19 All-Star game appearances, 10 All-NBA first team selections, six NBA championships, six MVP awards, and two Finals MVP awards. Kareem Abdul-Jabbar’s stats include career averages of 24.6 points, 11.2 rebounds, and 2.6 blocks per game. In 1995, he was enshrined into the Naismith Memorial Basketball Hall of Fame.

More Than a Player

Aside from his monumental career in basketball, Abdul-Jabbar is also one of the few influential and respected black American men who regularly contributes to newspapers and magazines around the world such as the Washington Post, The Hollywood Reporter, and TIME magazine. Using this national platform, he shared his thoughts some of the most politically controversial and socially relevant topics the nation is faced with today.