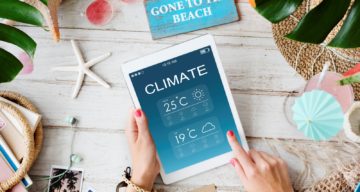 Karaline Cohen is an incredibly smart, beautiful, and sweet meteorologist. She was the perfect addition to the crew at WSYX ABC 6/WTTE FOX28, with her amazing personality and professionalism when providing weather reports. But now, she has announced her departure from the station for a very special reason. Karaline Cohen is leaving WSYX/WTTE in January 2023 for a new adventure with her fiancé. Naturally, the residents of Columbus, Ohio, are saddened by the news and have many questions. Fortunately, the meteorologist answered most of them. So here’s what Cohen has to say about her departure.

At the tender age of 10, Karaline Cohen declared her lifelong ambition of becoming a person on the news to her parents. And she did it.

Cohen graduated from the University of Illinois at Urbana-Champaign with a degree in broadcast journalism in 2016. After that, she earned a meteorology degree from Mississippi State University.

She interned with WCIA 3 News in Urbana-Champaign, Illinois. Cohen’s career began in Grand Junction, Colorado, where she worked at KKCO 11 News/KJCT 8 News.

In 2018, she joined NBC 24 WNWO in Toledo, Ohio, as a multimedia journalist and forecaster. Cohen has reported on everything from extreme weather and breaking news to local activities. She loves to get involved in the community and has created a special bond with the people of Columbus.

But now, Karaline Cohen is leaving WSYX/WTTE in January 2023. The station announced her departure and thanked her for contributing to the First Warning weather and news teams. Cohen is joining WSYX’s sister station in Cincinnati.

Cohen’s fiancé was offered a great opportunity in Cincinnati, so she will be heading there to build a future with her soon-to-be-husband. The couple got engaged in November 2022.

Furthermore, Karaline Cohen will be working as a weekday meteorologist at the new place. Her last day at WSYX/ WTTE is January 15, 2023; after that, she will head to Cincy with her fiancé.