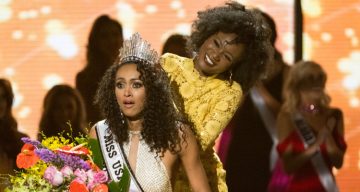 As the Miss Universe 2017 pageant comes closer, America is rooting for the current Miss USA Kara McCullough and hoping that she wins the top prize on Sunday, November 26, 2017. Even though the competition will be very tough, Kara McCullough has it in her to lift the crown on that fateful day.

The Miss Universe 2017 pageant will be held at The AXIS at Planet Hollywood in Las Vegas, Nevada, on Sunday, November 26, 2017, and the whole world will be watching. Millions of viewers all over the world will cheer for their favorite contestants as the show unravels, and the most beautiful women in the world compete to win the Miss Universe 2017 crown. America will surely be watching and hoping that their representative lifts the prestigious crown. This expectation will rest heavily on the pretty shoulders of the current Miss USA Kara McCullough, who won the title thanks to her beauty, talent, and intelligence. Here’s more about the reigning Miss USA 2017 in our Kara McCullough wiki.

McCullough was born in Naples, Italy on September 9, 1991, which makes her age 26. There’s no information on her mother, Betty Ann Parker, who, according to McCullough’s Mother’s Day Instagram post, raised three children that weren’t biologically hers, as well as two who were.

McCullough loves cooking for herself, so it’s no surprise that her favorite cuisine is Italian. Her father, Artensel E. McCullough Sr. was in the U.S. Marine Corps, meaning the family moved around a lot, and young Kara was raised in places like Sicily, South Korea, Hawaii, and Japan.

She’s the kind of queen that knows her crown isn’t on her head, but in her soul. . . I️ actually competed in @missuniverse prelims last night. Entering this role has been life changing and I️ wouldn’t change anything. Many people remember me as that soft spoken, extremely shy tomboy who walked fast with her shoulders hunched – Good thing those days are over and I️ just laugh about I️t ?. When I️ began college I️ promised myself that I️ wouldn’t live with the “what-if” factor anymore and I️ went after everything I’ve secretly always wanted to do. From trying out for cheerleading to play intramural basketball, I️ was determined to complete the task and not care what anyone thought. Now, because of my persistence to better myself daily, I️ feel confident with every move I️ make. So, to the young ladies reading this, whether you’re in high school or college, be intentional about your pursing your dreams. I️ know you already know this, but I️ believe in repetition. Lastly, It’s perfectly fine to dream, just don’t sleep???!! #execute . . Photo @carlosvelezstudios Make up and hair @victoriadukebeauty Confidence by @realkaramccullough Gown @sherrihill Earring @stefaniesomers Styling @henriscloud9 #investinyourself #persistence #steadfastbutnotstagnant #growth #missusa #missusa2017 #missuniverse #missuniverse2018 #scienceforkids #scienceexplorationforkids #se4k #intentionalliving #confidentlybeautiful #slay #fleek #realkaramccullough #curlyhair #curlsforthegirls #curlyhairroutine #healthycurlyhair #heatdamage #love #faith #god #sherrihill #missuniverse2017 #missuniverse #missusa #missfrance #betawards #phvegas

She was a member of the American Chemical Society, the Health Physics Society, and the American Nuclear Society. McCullough was also inducted into the Golden Key International Honour Society, and the National Society of Black Engineers. With such a busy student life, there’s no word on whether she had a boyfriend and her Instagram doesn’t give anything away, either.

#3. Her Day Job at the Nuclear Commission

It’s only natural that McCullough put her education and brains to good use in her professional life. She works as a nuclear scientist at the United States Nuclear Regulatory Commission.

In her pageant intro video, she said she had a fear of math as a child and overcame it to become a scientist. “It all became clear that I am in competition with myself, when I overcame my fear of math at a young age, graduated with a degree in Radiochemistry and decided to be the only scholar in my class to major in Radiochemistry.”

#4. She Has a Personal Outreach Program

In her spare time, McCullough spends time with kids with her own self-funded program, Science Exploration for Kids (SE4K). It offers math and science-based tutoring to students in grades six to eleven. She plans to encourage women and children to become interested in the science, technology, engineering, and mathematics fields during her reign.

“If I help one student pass math or chemistry, one young lady improve on the basketball court, one stranger learn about radiochemistry, I know that I have not allowed fear or failure to limit my success or ability to connect others,” says McCullough in the video.

#5. She Was Praised for Her Natural Hair

Kara McCullough received positive attention for showcasing her naturally curly hair during the Miss USA 2017 pageant. With the Miss Universe organization challenging old pageant beauty standards in recent years, her move was lauded. She said she was initially nervous about her decision, but decided to embrace it with the help of her hair stylist, Albert Luiz.

“When I choose to wear my hair natural I had a lot of support from many people, essentially, I decided to embrace what made me feel comfortable, embrace what makes me feel the best and brightest on stage. But also embrace what other people can relate to, so that typical, traditional sleek hair, big tease, not to say it’s gone out the window, but it’s transitioning a lot.”