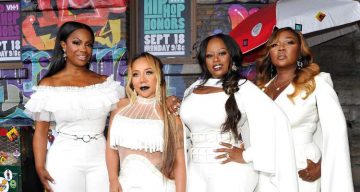 If you are a fan of R&B, then you know about the all-girl band, Xscape. Kandi Burruss, now known for being on Real Housewives of Atlanta, was a member of the group 25 years ago. Is Xscape really broken up? Or did their reunion last? Find out right here.

Xscape was the “it” group back in the ’90s, but they broke up in 1998. The band got back together and broke up a few more times since then, but now Kandi Burruss declared that she can’t be a part of the group anymore. Why did Kandi leave Xscape? Find out all the details, right here.

Kandi Burruss was the contralto in the group that also featured Tameka “Tiny” Cottle, as well as sisters LaTocha and Tamika Scott. The ladies had a huge taste of success when they debuted in 1992, but broke up for the first time before 2000. By then, they had two platinum albums, as well as platinum and gold certified singles. The group was seeing more and more success, but, as is often the case, they started to grow apart.

LaTocha and Kandi butted heads, and the group’s equation fell out of balance. To add to the drama, people were saying that they were “’ugly girls’ that were singing.”

Since they split, Kandi was the only one whose career reached new heights without the band. She went solo, and three years later, found even more success on Bravo’s Real Housewives of Atlanta.

The women came back together at the 2017 BET Awards, performing a medley of their old hit songs. They even announced their “The Great Xscape” tour, which would include Monica and Tamar Braxton. Though news is stirring with rumors of uncertainty regarding the tour, it seems the girls are still set to hit all the cities on their list. At this time, all the concert dates are still posted and tickets are still being sold. You can catch them at any of their below dates:

Bravo’s Xscape: Still Kickin’ It caught the attention of fans. The show went into details about the band, their equation, and their breakup, and airs Sundays at 9:00 p.m. EST.

However, Kandi is not able to dedicate her time to the band or tour, as she already has a packed schedule. But the other women are determined to bring out the best of the band, with or without Kandi.

Watch Tiny speak about the band’s breakup below: