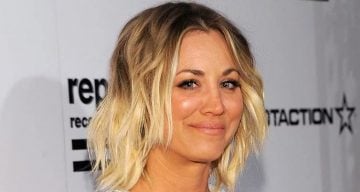 This past September, Kaley Cuoco, better known as Penny from The Big Bang Theory, separated from her tennis player husband Ryan Sweeting after about 2 years of marriage. This year may not have been the best for the stunning actress but she definitely seeks to end it on a happy note.

The 30-year-old shared photos to her official Instagram account, revealing her “squad goals” as well as “partner for life.” The TV star first posted a snap of her four dogs and simply added the hashtag of “squad goals” with it. With over 22,000 likes in an hour, her fans seemed to be able to relate to this extremely well! One graciously informed everyone of her dogs’ names: Norman, Shirley, Ruby and Chester, while another told Cuoco, “They ARE your squad, Kaley! [sic].”

And although the 8 Simple Rules star’s Instagram name- normancook- gives away the mystery of her soulmate, Cuoco went ahead and shared it anyway. Posting a selfie with her beloved canine, Norman, where she hid her face in his neck, Cuoco wrote in the caption, “Partner for life #norman.” Dog lovers and fans of the award-winning actress left comments such as, “Handsome fella!! You are a lucky one [sic],” and, “Norman seems so cool. You are lucky to have him. Tomorrow night you dance.”

Other Instagram users did have some serious questions for Cuoco as well: “Watching Big Bang right now. I’m curious… what is your next project? [sic].” That remains unknown, as she has not taken up any projets after The Wedding Ringer, Burning Bodhi and Alvin and the Chipmunks: The Road Chip; all of which released this year. If her Instagram posts indicate anything, it is that Cuoco is enjoying her well-deserved break. Right from cryotherapy to hanging out with tigers and lions to horse-riding, Cuoco is having the time of her life. However, she will be seen on TV soon, besides The Big Bang Theory of course, on January 7, when she appears on LL Cool J’s show, Lip Sync Battle.