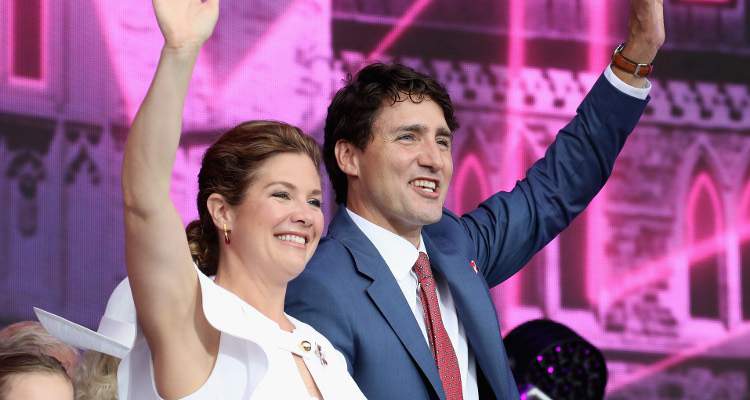 Justin Trudeau is probably one of the most popular chiefs of a country right now. It helps that he’s easy on the eyes. Canada’s First Lady, Sophie Grégoire Trudeau, is just as stunning as her amazing husband.

Sophie was born in Montreal, Quebec to Jean Grégoire, a stockbroker, and Estelle Blais, a Franco-Ontarian nurse. When she was four years old, her family moved from Sainte-Adèle to Montreal.

In Montreal, they lived in Mount Royal suburb where she went to school with Michel Trudeau, the youngest son of former Prime Minister Pierre Trudeau. Sophie became friends with Michel’s elder brother, Justin.

They lost touch some time later, during which Michel, 23, passed away in an avalanche in 1998. Sophie and Justin reconnected in 2003, when they co-hosted a charity ball together.

“There was definitely a physical and emotional connection,” she recalled, “We flirted. But I sent him an email then next day, and he never replied.” Playing hard to get Mr. Trudeau? But this was one fated couple! They bumped into each other on the street a few months later. At their first date, Trudeau predicted he would marry her. His forecast came true when they got engaged in 2004.

A post shared by Sophie Grégoire Trudeau (@sophiegregoiretrudeau) on Feb 14, 2017 at 3:48pm PST

#2. She Had an Eating Disorder

She said that she had a happy childhood, was a good student, made friends easily and loved sports and outdoor activities. However, when she hit 17, she struggled with bulimia nervosa.

“Anything that we didn’t have in the house, I wanted to eat.… I was just always hungry, hungry for something that wasn’t food, it turns out,” she said about her disorder that continued into her 20s.

Her parents didn’t know about it until she finally decided to tell them. With their support, she overcame her crisis. Sophie went to therapy and took up meditation and yoga to get over her eating disorder.

She now works with various organizations to spread awareness about eating disorders and body image related issues. She’s also a big advocate of yoga and even got her husband into it. She became a certified yoga instructor in 2012.

#3. She Was a Journalist

Sophie attended the Collège Jean-de-Brébeuf before studying commerce in McGill University in Montreal. She intended to follow her father’s footsteps but switched to communications.

After graduating with a Bachelor of Arts in communications from the Université de Montréal, she found a job at an advertising firm, as a receptionist. She was promoted to account manager soon. She spent three years in advertising, public relations, and sales before she left for radio and television school.

Sophie decided that this was what she wanted to do and soon landed in the newsroom. She went from writing the news ticker to being an entertainment reporter for LCN. In 2005, she joined CTV network’s entertainment show, eTalk.

Since Justin Trudeau took over the leadership of the Liberal Party, she left her reporting profession and turned to charity and speaking jobs.

A post shared by Sophie Grégoire Trudeau (@sophiegregoiretrudeau) on Sep 7, 2017 at 10:51am PDT

When Trudeau became a Member of Parliament for Montreal’s Papineau riding in 2008, his wife and children lived in their Montreal home. Trudeau, on the other hand, stayed in an Ottawa hotel. They sold their home and rented a house in Ottawa when he was elected the leader of the Liberal Party.

A post shared by Sophie Grégoire Trudeau (@sophiegregoiretrudeau) on Oct 8, 2017 at 7:57am PDT

It’s not uncommon for First Ladies to get involved in philanthropy. Sophie Trudeau is just very passionate about her causes. She is a spokeswoman who hosted events for numerous Canadian charities and non-profits.

Some of the other causes she supports include La Maison Bleue, a drop-in center for at-risk pregnant mothers; the “Pay Beauty Forward” campaign and Self-Esteem Fund by Dove; Girls for the Cure; the Canadian Cancer Association; the Canadian Mental Health Association; and the Women’s Heart and Stroke Association.

The 42-year-old also supports WaterCan, which aims to eradicate poverty and bring clean water to underdeveloped countries. Her mother-in-law, Margaret Trudeau is the honorary president of the organization and Sophie traveled with her to Ethiopia.

Sophie also works with the Because I’m a Girl initiative by Plan Canada to combat domestic violence. Since leaving journalism, she turned to professional speaking and champions women’s issues.

Are you committed as I am to making this world more gender equal? Well good news, the world’s largest gathering of women & girls is coming to Canada! @women_deliver will be in Vancouver in 2019. Between now and then, let’s keep moving forward – with baby steps or big ones – to fight for equality and justice for women around the world. When girls and women rise, boys and men rise as well – and everybody wins.

A post shared by Sophie Grégoire Trudeau (@sophiegregoiretrudeau) on Nov 20, 2017 at 1:31pm PST