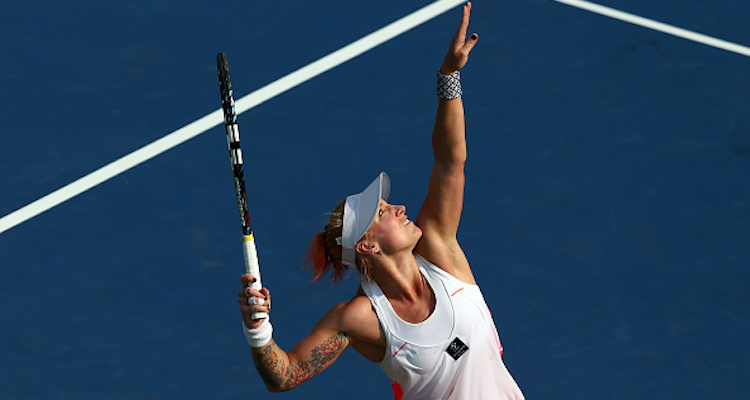 Today was just another day for tennis in Wimbledon, that was until star player, Bethanie Mattek-Sands got injured! Now, everyone wants to know what happened to the 32-year-old tennis pro and is looking for details on Bethanie Mattek-Sands’ husband. If you want to know more about Justin Sands, then we have what you need.

Who is Bethanie Mattek-Sands Married To?

Unless you’re a hard core tennis fan or just a fan of Behtanie Mattek-Sands, then chances are you don’t know who the tennis pro is married to. His name is Justin Sands. As for Justin Sands’ age or Justin Sands’ net worth, those questions are harder to answer since his private life is just that—private! We do know that he is from Boyertown, Pennsylvania and married Bethanie in 2008 in Naples, Florida. Though Bethanie is from Minnesota, she and her husband currently live in Phoenix, Arizona with their English mastiff dog, Ruger.

There’s no trace of Justin’s Instagram, but why have your own when you can just share your wife’s account? If you search through the pics, you will eventually find a bright red beard and that’s Justin. From taking selfies of date nights to flying on planes together, Justin is always there for his wife, and judging by the comments, Bethanie’s fans love seeing him!

He Has Some Body Art

Justin has a few tattoos to go with that beard, and one of them in particular is his wife’s name in a huge font on his right arm. Nothing says forever like putting your wife’s name on your skin!

This crazy fan has my name tattooed on his arm ?? #commitment #charleston @volvocaropen #TeamBucieu

His Wife Got Injured

While Bethanie was facing her opponent, Sorana Cristea, she injured her leg and fell to the ground screaming “Help me! Help me, please!” Cristea walked toward the net to see what was wrong as Behtanie kept holding onto her knee and screamed.

“I’ve never seen anything like this in my life, such an injury,” Cirstea said to The New York Times. “So then I think I was a little bit shocked, as well.”

She added: “I said, ‘I am here, you are strong, you can do this.’ I was trying, but of course I felt useless.”

Justin and Cristea’s trainer were gathered around her until the ambulance came, which took roughly 10-20 minutes.

The tournament defended its response in a statement, saying “The first response to Court 17 was within 1 minute, by a qualified ambulance technician. The player was kept on court while pain relief was given. The player was then transferred directly into an ambulance and taken under emergency conditions to a hospital.”

There is no word on how Bethanie is doing yet, but she has been taken to hospital to see the extent of her injury.

No Nickname for Bethanie in His Phone?

In an Instagram post, Bethanie took a screen shot of what her husband has her listed as in his phone. It’s not “Babe” or “Wifey” or even just her first name! Turns out, he calls her “Bethanie Mattek-Sands.” That’s right! He ‘full names’ her on his phone and it’s quite comical! But even Bethanie joked that she used to be in his phone as “tennis player,” so it’s certainly a step up!