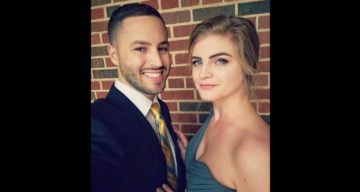 Kaitlin Bennett, the infamous Gun Girl, tied the knot in 2020 amid the coronavirus pandemic. Her new husband, Justin Moldow, is someone who shares her political and social views, which have been very contentious topics on the Internet. But, unlike Bennett, who is at the forefront of political commentary, Moldow stays behind the scenes, supporting their shared opinions. This makes the Internet very curious about Kaitlin Bennett’s husband, especially with some very eyebrow-raising rumors circulating through the gossip mill.

Justin Moldow, who is based in Cleveland, Ohio, is of Italian, Spanish, and Jewish descent. He was raised in the Catholic faith, which strongly influences his politics.

An honors student, he was politically and socially active and founded the Young Americans for Liberty at Manhattan College. Moldow graduated from Manhattan College with a B.S. in marketing.

Moldow founded his political commentary site, Young Jeffersonians, with Kaitlin Bennett in 2015. With his marketing expertise, he grew the site’s network to associate with other organizations. The site later re-branded as Liberty Hangout, which it’s still known as.

Justin Moldow’s bio on Liberty Hangout states that he is “an avid proponent of libertarian thought, as well as Austrian economics, and is a steadfast defender of liberty.”

Kaitlin Bennett is the face of Liberty Hangout and one of the major content producers of the site.

Kaitlin Bennett announced her engagement to Justin Moldow in February 2019. But their 2020 wedding plans hit a snag because of the pandemic.

It is such a blessing to call you my wife @KaitMarieox, and it's an honor to have completed the Sacrament of marriage in the Catholic Church. May God forever bless our marriage and keep us in union with the Holy Spirit. pic.twitter.com/2ElPUW7Bvm

Moldow’s Rumored to Have Gone Through Conversion Therapy

No matter who you are, the Internet can be a cruel and nosy place.

When Bennett and Moldow shared their wedding pictures, Moldow provoked the curiosity of social media users. Many allegedly felt his mannerisms and appearances evoked the gay stereotype.

Even though his sexuality is no one’s business, many on social media have publicly wondered whether Bennett’s husband is gay. Given Moldow’s very public disdain towards the LGBTQ+ community, this has the potential to be a very contentious issue.

Many have also questioned Moldow’s intentions towards Bennett. Especially when there are allegations of him making unsolicited advances to women in DMs around the time he and Bennett were dating. This alleged incident has the public questioning whether Moldow is faithful to his new wife.

One such screenshot shows Moldow allegedly messaging a woman “Hey beautiful ” in DMs. When the woman brings up his then-girlfriend, Moldow allegedly responded with “Please do not tell her and I’ll leave you alone.”

Meanwhile, there is heated speculation that Moldow went to conversion therapy, though the origin of this unsubstantiated rumor is unknown. Conversion therapy is said to be cruel and torturous.

Moldow hasn’t addressed the DMs he allegedly sent. He, however, did respond to the rumors about his sexuality.

“Apparently a lot of liberals on this website are calling me gay for cleaning up nice on my wedding day,” he tweeted. “I think they’re just in denial over the fact that they’ll never have a wife as beautiful as mine. Or even find love.”