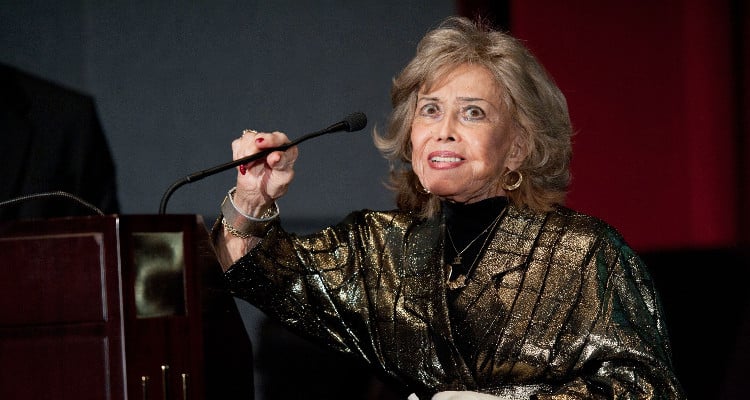 June Foray, one of the greatest voice actresses ever, passed on Wednesday (July 26). She’s most famously know as the voice of Rocky the Flying Squirrel in The Rocky and Bullwinkle Show. Her entire career has earned this icon a net worth of $10.0 million.

June Foray was a talented voice artist, who made us forget about the human behind one of our favorite animated characters, Rocky the Flying Squirrel. That was the talent that made her the First Lady of Voiceovers. Foray passed away on Wednesday, leaving behind many fans of her work. If you want to know about June Foray’s cause of death, her net worth, family, and more, check out our June Foray wiki, right here.

Born June Lucille Forer, June and her two siblings were raised in Springfield Massachusetts by their parents, Morris Forer, an engineer and Ida Robinson. With a large appetite for reading, she memorized Shakespeare and studied poetry and drama, which helped her in her career. Even before she reached her teens, 12-year-old June’s voice was making her famous. She started out at a local radio show and by the age of 15, it was a regular gig for her.

Two years later, after she graduated from Classical High School, her father faced financial problems. So, the family relocated to Los Angeles where June’s uncle lived. Not long after her move to Los Angeles, June’s voice acting career took off.

RIP June Foray. She was 99 years old! She was the voice for many many cartoon characters such as Granny from looney tunes, rocky from the bullwinkle show, cindy lu who from the grinch who stole christmas, lucifer the cat from cinderella just to name a few! She even did the voice for the original chatty kathy doll! What a legend! She will be missed. #juneforay #granny #stronggirlvibes #shewasastronggirl #womenempoweringwomen????

Foray landed her own radio show called Lady Make Believe, which then made her a much sought-after voice actress. Along with shows like the Lux Radio Theater and The Jimmy Durante Show, she was offered roles in films and live action movies. At 18, she was earning $100 a week at Paramount. With animations gaining traction in those days, she did several voice-over roles in cartoons.

Her most famous work, and perhaps what no one else can measure up to, is voicing Rocky the Flying Squirrel in The Rocky and Bullwinkle Show. She also lent her voice to almost every female character in the series, including Natasha Fatale and Nell Fenwick —and you wouldn’t be able to tell they are the voices of the same person!

When we’re talking about animations, we can’t leave out Disney! Foray was also on Walt Disney’s payroll, having voiced Lucifer, the wicked cat from Cinderella; Lambert’s sheep mother in Lambert the Sheepish Lion; a mermaid in Peter Pan; and Witch Hazel in a Donald Duck short. She also played Mulan’s wise-talking grandmother, Fa in the 1998 Disney animated feature. Her impressive work at Disney prompted Chuck Jones to get her on board Warner Bros. Cartoons. Her most famous role was Sylvester and Tweety’s Granny which she reprised in other Looney Tunes spin-offs.

In 2009, Foray released her autobiography, Did You Grow up with Me, Too? about her career that spanned decades. The very apt title is relevant to those of us who grew up watching cartoons we didn’t even realize were voiced by Foray! Besides roles on The Super 6 and How the Grinch Stole Christmas, her talent for myriad qualities of voices was also seen in the evil Living Doll in The Twilight Zone.

Having worked for cartoon giants like Disney and Warner, the voiceover world’s queen turned to Hanna-Barbera. She voiced characters in Tom and Jerry, Scooby Doo, Where are You!, The Jetsons, The Flintstones, and more! She once said she was “terribly disappointed” when she lost the part of Betty Rubble in The Flintstones.

She had a long run as Aunt May in the Spiderman and His Amazing Friends series. She also had roles in old cartoons like The Smurfs, Ducktales, Teen Wolf, George of the Jungle, The Looney Tunes, The Powerpuff Girls, and Disney’s Adventures of the Gummi Bears.

June Foray’s other works included radio shows, commercials, dubbing for films, shows, video games and live action. She also recorded children’s albums at Capitol Records. However, she’s best known for voicing characters that made up our childhood. Voice actors for Warner Brothers like Foray were uncredited for their roles. Mel Blanc, the original voice of all main Looney Tunes characters, was the only credited actor! But Chuck Jones knew Foray was a star among voice actors. He reportedly once said, “June Foray is not the female Mel Blanc, Mel Blanc was the male June Foray.”

She was also at the helm of founding the Annie Awards —an award show specially for animation. She won an Annie Award for the Sylvester and Tweety Mysteries and was honored with the Comic-Con Icon Award at the 2011 Scream Awards. In 2012, at the age of 94, she won her first Emmy for Outstanding Performer in an Animated Program, becoming the oldest entertainer to be nominated for and win an Emmy. Voice acting alone has earned her a net worth of $10.0 million!

The voice acting trailblazer spent the latter half of her career towards the preservation and promotion of the animated craft. She taught voice-acting at USC during the ‘80s. Aside from her autobiography and numerous articles on animation in magazines, she was one of the founders of the International Animated Film Association. She was the first recipient of the June Foray award established by the association. For two decades, she lobbied for the Academy to create an Oscar category for animation. Her efforts paid off when the Academy Award for Best Animated Feature was established in 2001.

After her first marriage ended in divorce, Foray met her future husband, Hobart Donovan, on the radio program, The Buster Brown Show. Donovan, a screenplay writer and director, went on to work with Foray on Steve Allen’s morning radio show, Smile Time. They married in 1954 and were together until his death in 1976.

They couple didn’t have children to survive both Foray and Donovan. On July 26, Foray’s close friend, Dave Nimitz announced her passing on Facebook, “With a heavy heart again I want to let you all know that we lost our little June today at 99 years old.” Foray would have celebrated her 100th birthday in September. Her cause of death has yet to be announced.

RIP June Foray and thank you for shaping our childhood.