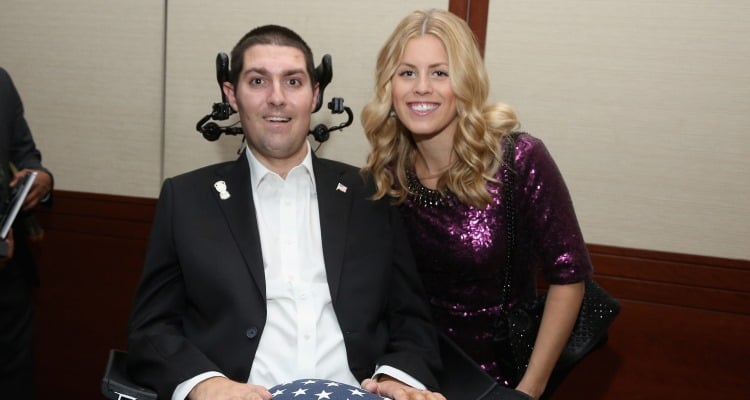 Everyone remembers the famous Ice Bucket Challenge that helped raise money for victims with Amyotrophic Lateral Sclerosis (ALS). But now, the man behind the charity is facing a challenge of his own. Pete Frates’ wife has spoken up about her husband’s condition, and now others want to know how he’s doing. For more information on his wife and this story, keep reading our Julie Frates wiki.

Who is Julie Frates?

Many don’t know about the woman behind the man who became the face of ALS, but people have been wondering who she is. Julie Frates’ age is 26 and she met Pete, 32, on July 4 in 2011 on a beach in Marblehead, Massachusetts, where Julie is from. She was a senior at Boston College while he was a former Boston College baseball star. Julie (nee Kowalik) became Julie Frates on June 1, 2013. The two were dating while Pete was sick and Julie even left her college dorm to travel to Beverly (Massachusetts) to help Pete’s parents, Nancy and John. Turns out, she was already wife material before they even got married.

In 2014, Julie and Pete’s family was complete, when Julie gave birth to their now two-year-old daughter, Lucy Fitzgerald Frates.

“Yes!! Little Lucy Frates has arrived and Mom, Dad and Lucy are perfect! Amazing blessing as the exclamation point to the miraculous month of August 2014!” the Frates family posted on Facebook.

Please keep #PeteFrates & his family in your thoughts as he is back in the hospital this weekend. ❤️

While Julie does have an Instagram account, fans won’t be able to get a look the blonde mother of one, because her account has been set to private. Julie Frates Twitter is also a way to reach her, and Julie Frates’ Facebook is actually a part of the family’s Facebook page. Majority of fan interaction and updates come from Julie’s mother-in-law Nancy, who’s also a motivational speaker. And in the condition her son is in, he couldn’t have received a better mother to help him.

There’s a rumor going around that Pete Frates died earlier today, but that’s all it was, a rumor. According to a Facebook message by Pete’s family, he is stable and currently “resting comfortably” at Massachusetts General Hospital.

“Update on Pete – July 3rd! Pete’s family wants everyone to know that Pete is resting comfortably at MGH as the doctors, medicine, prayers and love continue to help him get stronger,” a post on the Team FrateTrain Facebook page said. “Thank you for all your concern.”

They’re Behind on Medical Expenses

The Ice Bucket Challenge has raised millions of dollars to find a cure for ALS, but unfortunately, Pete and Julie have been struggling to make ends meet due to medical expenses. When Pete was diagnosed, his family made sure to care for him at home no matter what, but it’s now costing them between $85,000- $95,000 per month. Rob griffin, a long-time family friend and philanthropist, has partnered with the Frates family and ALS to raise money for families in need.

“We hope to start an initiative to help the Frates family and all families that are going through that, and hope it takes off on national basis. We’re trying to kick it off here in Boston,” Griffin said.

Get well soon Pete Frates. Your fight with ALS and the creation of the ice bucket challenge to help raise awareness for the disease will always be remembered #als #icebucketchallenge #petefrates #getwellsoon