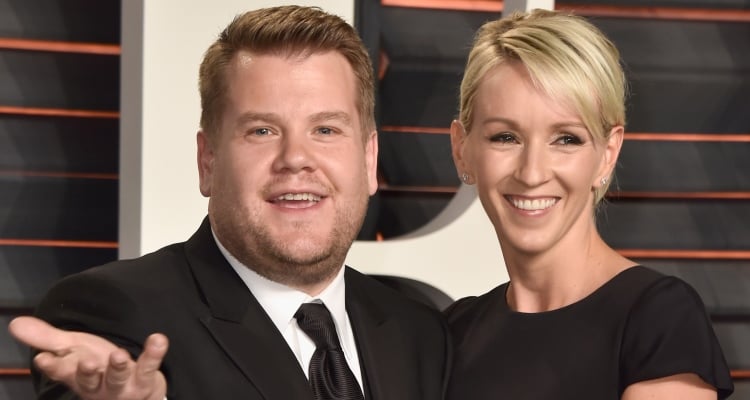 James Corden was recently announced to be the host of the 59th Grammy Awards, and while we all know the beloved host of Carpool Karaoke, people are curious about who his wife is. We’ve got some fun facts to share about his beautiful bride!

The adorably charming host of The Late, Late Show and Carpool Karaoke, James Corden was recently announced as the host of the 59th Grammy Awards, which will air on February 12, 2017. The British comedian became a breakout success thanks to his enthusiasm for pop music, and since his success hosting the Tony’s earlier this year, it really comes as no surprise that he was chosen. In a statement regarding the Grammys, he said, “I am truly honored to be hosting the Grammys next year. It’s the biggest, most prestigious award show in music and I feel incredibly lucky to be part of such an incredible night.” While the world is familiar with James Corden, few people know little about James Corden’s wife. His beautiful bride’s name is Julia Carey, and we’ve got some fun fact to share about her, including facts about Julia Carey’s net worth, their wedding and her life as a mom. We’ve also got some great James Corden and Julia Carey pics for you to see! Keep reading!

She’s Part of his Happy Family

James Corden proposed to his beautiful wife on Christmas Day in 2010, and they tied the knot during a lavish ceremony in Somerset’s Babington House on September 15, 2012. Several celebrities were invited such as David Williams, Jimmy Carr, Natalie Imbruglia, and Matt Smith. Snow Patrol frontman, Gary Lightbody serenaded the couple at the ceremony.

They Have Two Children

Corden and his wife have two adorable children together. Their first son, Max, was born during their engagement on March 22, 2011; and on October 27, 2014, they welcomed their second child into the world, daughter Carey. The Corden family was born and raised in the UK, however, they moved to the U.S. when Corden became the new host of The Late, Late Show. In an interview with Big Issue in December 2015, Corden explained the challenges of being away from the UK. “For my wife to make this move when our daughter was five weeks old is incredible. I will always be indebted. We just went for it. I don’t know if we will live here forever. We are a long way from grandparents, aunties, uncles, and friends. It is tough. But I am home much more than if I was making a film. I feel very conscious that my children are only going to be young once. And, as far as I can tell, no one ends up on a therapist’s chair saying: ‘My dad was around too much giving me too many cuddles.’”

She Spoke “Posher” for Her Children

James Corden told Big Issue that when their family moved to America he was concerned that his youngest child, Carey, would not get the chance to know or live in Britain. His wife took extra measures to make sure their children grew up knowing the accent and culture of their home in the UK. “My wife is speaking posher and posher around the house to try to keep them British.” That’s super adorable and it’s important to keep children informed of their roots!

While Julia Carey’s net worth is unknown, her husband’s net worth is $10.0 million. His wealth is credited to not only his success as the late-night television host, but from his work as an actor, producer, writer and comedian.