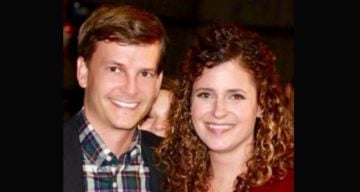 Congressman-elect Luke Letlow from Louisiana passed away on December 29, 2020. He was 41. Then a newly-elected congressman, he is survived by his wife, Julia Barnhill Letlow, and their children. Now Julia Letlow has won a special election in 2021 to replace her deceased husband in Congress. Julia and Luke were together for many years and had supported each other through their respective careers. Luke Letlow’s widow now hopes to continue her husband’s work, and also has the attention of the country as she takes on her new role. This Julia Barnhill Letlow wiki reveals more about her marriage and her career.

Julia Janelle Barnhill was born on March 16, 1981 in Louisiana. She hails from Monroe, Louisiana, where her family is from.

Julia is one of three children born to Terry and Kathi Barnhill. Terry Barnhill is from Mississippi and worked at Xerox and Merrill Lynch.

Julia grew up alongside her sister, April, and brother, Jeremy. April Barnhill Rodgers is married and a mom. She is the president of the Jeremy Barnhill Foundation for Christian Teens.

Jeremy Barnhill was only 17 when he died in a car accident in 2002. April and her family started the foundation in his name to provide financial assistance to teenagers.

After graduating from Ouachita Christian School, Julia Barnhill majored in speech communications at the University of Louisiana at Monroe. She earned her BA in 1999 and her MA in 2005.

Barnhill lived in Florida where she was working on her doctorate at the University of South Florida. She earned her PhD in communication in 2011.

After earning her doctorate, she returned to Louisiana where she served as the director of education, director of resident patient safety and quality improvement, and clinical instructor at Tulane University from 2011 to 2013. She returned to her alma mater in Monroe in 2014, where she continues to work as an instructor.

Julia Letlow is perhaps the one who knew Luke Letlow’s goals best. So it’s no surprise that she won her late husband’s seat in Congress in a special election on March 20, 2021.

She won a reported 62% of the vote in the 12-way race to replace her husband’s seat. Her election win brings the number of Republican women in Congress to 31.

Both Barnhill and Letlow were graduates of Ouachita Christian School. They were engaged in 2013 and got married on April 27, 2013. Julia and Luke had celebrated seven years of marriage in 2020.

Julia and Luke Letlow welcomed their first child, a boy they named Jeremiah, on September 21, 2017. Their second child, Jacqueline, was born in February 2020.

Luke Letlow won the 5th Congressional District on December 5. The Congressman-elect announced he had tested positive for COVID-19 on December 18, mere days before he would be sworn in.

He initially quarantined at their family residence in Richland Parish. When his symptoms persisted, he was transferred to Ochsner-LSU Health in Shreveport on December 23. He passed away on December 29 at the age of 41.

The LSU Health Shreveport chancellor stated Letlow died from a heart attack following a procedure related to the infection. He is survived by his wife Julia and their three-year-old son and 11-month-old daughter.

Julia and the family have received a flood of condolences. She thanked everyone for their support and is providing updates on Luke Letlow’s official social profiles.

In Julia Letlow’s campaign bio spot, she said: “While losing Luke has been devastating, I know that two things can be true at the same time.” She further added, “A person can be full of grief while still having hope for the future.”