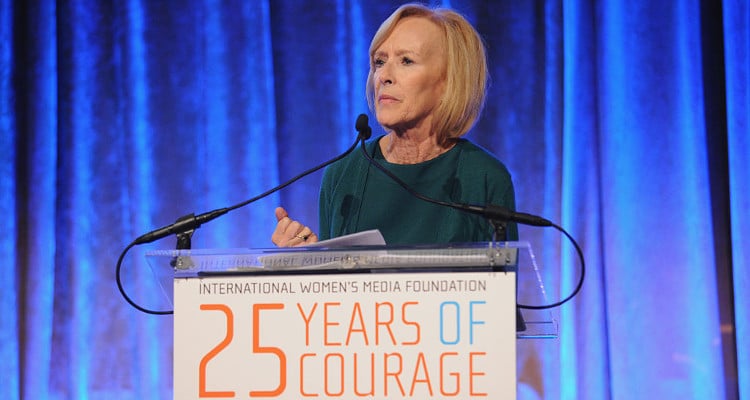 When it comes to politics, nothing escapes her. Judy Woodruff is the celebrated news anchor most often seen on PBS Newshour. When it comes to the media, she is a striking figure.

Judy Woodruff does not know how to slow down. Her schedule is packed with luncheons, dinners, meetings, and of course, hour-long broadcasts. The PBS news anchor recently got up close and personal with business magnate, Warren Buffet. And she also gives her take on politics every day. She’s at the top of her game and “retirement” is faraway concept to her. Definitely a busy woman! Find out why she’s a newsroom workhorse in Judy Woodruff’s wiki.

She Moved a Lot as a Child

Judy Woodruff was born in Tulsa, Oklahoma to Anna Lee Payne and U.S. Army Chief Warrant Officer William H. Woodruff. She was a typical army brat and moved around the country. She and her sister, Anita, have lived on or near several U.S. Army bases such as New Jersey, Missouri, as well as Taiwan and Germany.

In seventh grade, her father retired and the family moved to Augusta, Georgia. There, she competed in pageants and was crowned Young Miss Augusta 1963. She graduated from the Academy of Richmond County and went to Meredith College. She later transferred to Duke University where she graduated with a degree in political science in 1968, when the Civil Rights Movement was at its peak.

Woodruff began her career in 1970 with a CBS-affiliate station in Atlanta. She later joined NBC and covered the 1976 U.S. presidential campaign of Jimmy Carter. From there, she moved to Washington to cover the Carter administration as NBC’s chief White House correspondent.

She was then the Washington correspondent for The MacNeil/Lehrer NewsHour on PBS for a decade and hosted the documentary series, Frontline with Judy Woodruff. She hosted Inside Politics on CNN for 12 years before she left, much to CNN founder, Ted Turner’s regret.

She was considered a trailblazer for female news anchors; she was modest, saying she couldn’t keep up with female journalists elsewhere. But her colleagues say otherwise. The crew at PBS say she set a high standard in the newsroom. Woodruff has used her experience to teach media and politics at Harvard and Duke. She is also one of the founders of International Women’s Media Foundation and authored a few books. In her career, she has earned a net worth of $3.0 million.

She Made History with Her Co-Anchor

In 2013, she was named a co-host on Newshour with Gwen Ifill, a pioneer for African-American journalists. The two of them made history as the first all-women pair to moderate a major presidential debate. Pauline Frederick and Barbara Walters were among the first women to moderate presidential debates but were paired with male moderators who asked all the questions. Woodruff and Ifill moderated the democratic debate last year between Bernie Sanders and Hillary Clinton.

Shortly after the election results, Ifill passed away after a long battle with cancer. While PBS looks for Woodruff’s new co-anchor, she runs Newshour by herself. And she misses her old friend. “Gwen was more outgoing than I am,” Woodruff said. “I consider myself a people person, but Gwen was really a people person.”

Her Husband’s a Journalist

When Woodruff was covering Carter’s campaign in 1976, she participated in a softball game between journalists and the Carter staff. There, she met a Wall Street Journal reporter by the name of Al Hunt. He said he had noticed her a month ago when he sneaked a glance at her legs while they used adjoining phone booths.

They dated when she moved to Washington and got married three years later. Hunt described their wedding in true Washington fashion, “equidistant between the New York and Pennsylvania primaries.” Hunt is another journalistic stalwart who currently hosts Political Capital on Bloomberg.

She Spreads Awareness about Spina Bifida

The 70-year-old and her husband work to spread awareness about spina bifida, a birth defect in which the spinal column is not fully formed. It comes from their own experience raising a son with spina bifida. Woodruff and Hunt are parents to Jeffrey, 35, Benjamin, 30, and Lauren, 28.

Jeffrey was born with a mild case of spina bifida. With treatment, he lived a somewhat normal childhood. However, he underwent a surgery in 1998 that caused brain damage and left him disabled. Now Jeffrey can’t walk, talk, or eat by himself.

Woodruff reduced her workload to commute from Washington to the Kennedy Krieger Institute in Baltimore where her son was. The devastated parents scheduled their work to balance Jeffrey, their other kids and work. Jeffrey eventually graduated from college.