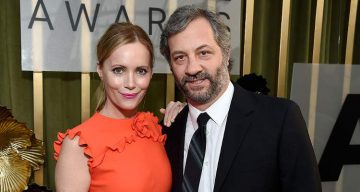 Writer, producer, director, and comedian Judd Apatow is a superstar in comedy circles. He wrote and produced comedy hits like The 40-Year-Old Virgin and Knocked Up, and continues to take Hollywood by storm with his refreshing movies. Judd Apatow’s Netflix show released yesterday, and it is a laugh riot. Keep reading to find out how Apatow’s estimated net worth of $90.0 million was made.

For Judd Apatow, stand-up comedy will always be his first love. It was at a comedy club where he first developed a passion for rib-tickling humor and zany wit.

The multi-talented man went on to be a producer, director, and scriptwriter, but returned to his roots for a new Netflix show, Judd Apatow: The Return that released yesterday (December 12).

How did Apatow go on to conquer the world of comedy? We’ve got everything you need to know about him, including Judd Apatow’s net worth in 2017.

Judd Apatow was born on December 6, 1967, in Queens, New York. His father was a real estate agent, and his mother managed record labels founded by her father.

Apatow’s parents divorced when he was 12, and that had a big impact on his life, and became a driving force for him to do something great.

In a 2015 Rolling Stone interview, Apatow said, “When I was a kid, I wanted to leave, I wanted to move to California— I wanted to get out of there. Whatever was difficult in my childhood, from my parents getting divorced or whatever problems we had, it was my motivation to get a job and work hard … The worst parts of my life have been the reasons why I’ve been able to accomplish anything I’ve accomplished.”

Apatow’s love for comedy began when he accompanied his mother to her job at a comedy club one summer. His comedy idols were Steve Martin, Bill Cosby, and the Marx Brothers.

His career in comedy kickstarted as a teenager. He washed dishes at the Long Island East Side Comedy Club and hosted a comedy show on his high school’s radio station. The radio show helped him meet his favorite comedians, and he even managed to get interviews with Howard Stern, Steve Allen, Jerry Seinfeld, and others.

At 17, Apatow began performing as a stand-up comedian. He moved to Los Angeles and pursued a screenwriting program at the University of Southern California.

In college, he immersed himself in organizing comedy nights and performed at The Improv in Hollywood. It was at this time that he met Hollywood superstar Adam Sandler.

BENEFIT FOR VICTIMS OF THE VEGAS SHOOTINGS. NOV 3 – LARGO LOS ANGELES. Starring Adam Sandler and myself but we are older than we are in this photo. Link in bio. Let's help!

Apatow joined various TV shows as a writer in the ‘90s. His work on The Larry Sanders Show earned him six Emmy nominations.

He went on to work on many projects like Freaks and Geeks and Anchorman: The Legend of Ron Burgundy before making his debut as a director in The 40-Year-Old Virgin starring Steve Carell. The film went on to win many awards and grossed over $175.0 million worldwide.

Many films buffs may have noticed that Apatow often collaborates with the same crew and cast on many of his projects. You’ll often see his wife Leslie Mann, Seth Rogan, Jason Segel, Paul Rudd, and Will Ferrell in many of his films.

From working on Knocked Up to 2011’s runaway hit Bridesmaids and even Lena Dunham’s Girls, Apatow’s name spells success!

Judd Apatow’s wife is a celebrity in her own right. The couple met on set of The Cable Guy in 1996 and got married in June 1997.

Mann worked with Apatow on a string of projects like Freaks and Geeks, Knocked Up, The 40-Year-Old Virgin, and more.

Judd Apatow and Leslie Mann have two daughters: Maude and Iris. Both of Judd Apatow’s kids have made appearances in his movies, and have quite a fan following on social media.