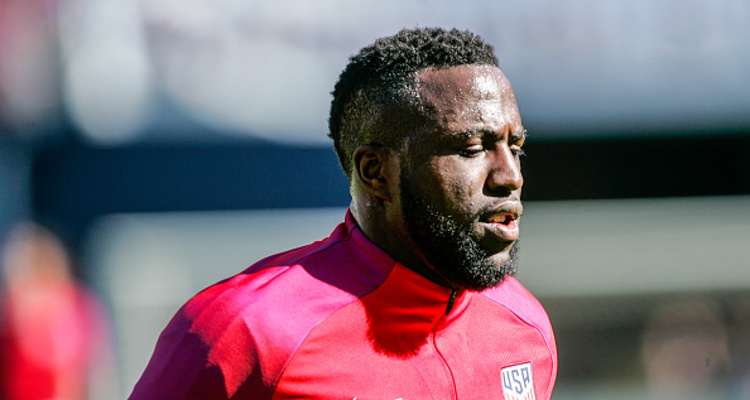 Jozy Altidore was bit during the soccer game between El Salvador and the United States last week. Though it’s not the first time we’ve seen soccer players bite each other on the field, it has definitely left Altidore in shock and pain. What did Altidore’s girlfriend say about this? Who bit the striker, and why? Read on to find out who bit off more than he could chew and learn all about the Toronto FC striker in Jozy Altidore’s wiki.

Jozy Altidore may have just proved his value as a player when his ultimate free kick gave the U.S. a much anticipated lead over Jamaica on July 26. Altidore has just won over more hearts and fans for the talent he showed on the field during the Gold Cup final, when the U.S. had a 2-1 lead over Jamaica. Tensions were building as the score was tied up, and after many breaks, a yellow card, and an injury, the U.S. proved to be victorious. Find out all about Jozy Altidore, a player who just made his country proud, right here.

Jozy Altidore was born on November 6, 1989, in Livingston New Jersey, but was raised in Boca Raton, Florida. The soccer player is the youngest child in his family and has a Haitian background. Altidore’s parents, Giselle and Joseph Altidore, immigrated to the States to start a new life. He was raised a Jehovah’s Witness and Altidore played soccer since he was a little boy.

Education was the top priority in his family and when Altidore started showing interest in sports, his mother was not all that keen on his focus being divided. After some persuasion and a promise to continue studying hard, Altidore started playing soccer. He soon played with many Florida clubs like Boca Raton Juniors Soccer Club, Schulz Academy, and Sunshine S.C., all the while training with the U-17 National Team in Bradenton.
t>

It all began in 2006 when Altidore was the 17th overall pick in the MLS SuperDraft with the MetroStars (now New York Red Bulls). He spent most of the season off the field, as he still needed to study and earn his high school diploma in Florida. Altidore scored his first professional goal in 2006, at the U.S. Open Cup. After the game, there was no stopping the young player as he was picked up by many clubs like Villarreal La Liga, Xerez, Hull City, Bursaspor, and Sunderland.

In 2015, Altidore was sent by Sunderland to Toronto FC, where he currently plays, for an unrevealed amount as a trade for Jermain Defoe. Though details of the deal were not disclosed, it must have been substantial as Altidore was signed to a Designated Player Contract by Toronto. When it was time for Toronto to face off against the Vancouver Whitecaps, Altidore scored twice, allowing his team to win 3-1.

Is Jozy Altidore’s Girlfriend Mad at Him?

During a recent game between the U.S. and El Salvador, Jozy Altidore’s girlfriend saw another player bite her boyfriend. As if that weren’t bad enough, his nipples were also pinched by El Salvador’s Henry Romero. This is a pattern common to El Salvador, as their players were seen biting or scuffling opponents in previous games, including Omar Gonzalez during the CONCACAF Gold Cup. While the teams faced off on July 19, Romero came up behind Altidore and went full Dracula on the striker’s left shoulder, pinching his nipple as well. As Altidore fell down, the game continued. After the game, Altidore said that his “girl’s mad,” because “she’s like: ‘Only I can bite you, only I can grab your nipples.” Well, all’s well that ends well as the U.S. beat El Salvador and went on to the semi finals.

The Toronto FC striker is certainly in demand, and rightly so! He is an amazing soccer player and he’s got the stats to prove it. Jozy Altidore’s net worth is a very impressive $8.0 million. The champ reportedly gets a salary of $2.2 million alone. In 2008, he signed a deal with Villarreal for $10.0 million, which is the largest sum payed to any MLS player. This should be enough to patch up any “holes” in his life!