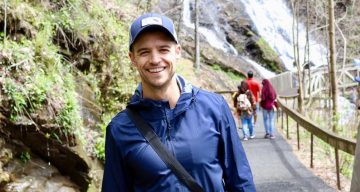 Joshua Snyder Out On an Adventure. Credits:Instagram/joshuasnyder

Joshua Snyder is married to The Office actress Angela Kinsey, and he is also known for his YouTube baking channel called “Baking with Josh & Ange.” He is also an actor, and fans loved him in Shopgirl.

Joshua Snyder’s wiki provides more facts about him that you probably didn’t know.

Joshua Snyder is an actor-turned-baker and is now mostly known for his YouTube channel. He is also very famous on Instagram for all the cookies he decorates. As for his Office lady love? Snyder and Kinsey got engaged in August 2016 and tied the knot in November the same year.

Snyder has two sons from his previous relationship, and Kinsey has one daughter with her ex-husband, Warren Lieberstein.

Joshua Snyder was born on November 11, 1977, making his age 40. His YouTube channel, “Baking With Josh & Ange” has over 50k subscribers and Snyder is the main guy behind all the baking and decorating. And he’s equally popular on other forms of social media, too. 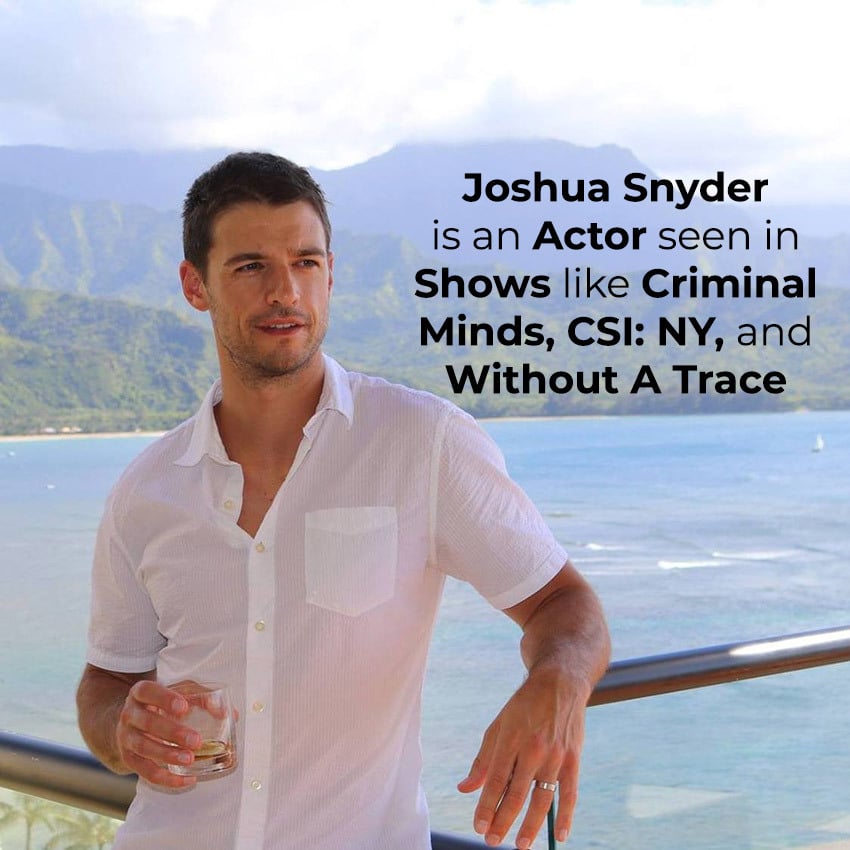 Joshua Snyder is an Actor seen in Shows like Criminal Minds, CSI: NY, and Without A Trace. Credits:Facebook/JoshuaSnyder

His Instagram account has over 70k followers and rising! He is an actor seen in shows like Criminal Minds, CSI: NY, and Without A Trace. He also appeared in movies like Miss Dial and Shopgirl.

Snyder’s sons, Cade and Jack, and his step-daughter Isabel, all helped with the proposal back in 2016. 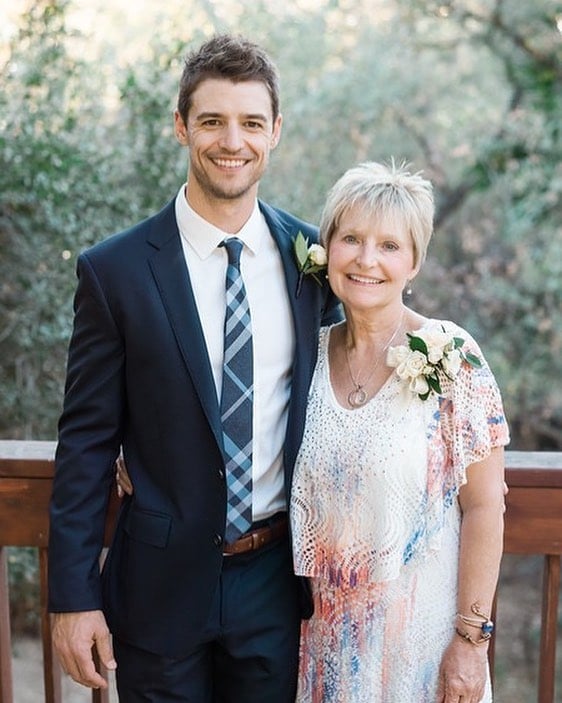 His mother’s name is Lynne Snyder and she is a healthcare counselor. He grew up with two sisters, Josi and Jori. There isn’t much known about Snyder’s father.

He attended Northglenn High School in Colorado, and then went to the University of Colorado Boulder for his graduation.

The 6’1” tall actor, credits his grandmother for baking all his birthday cakes, and also teaching him the ways of the kitchen.

He’s been baking since 2007-2008 (when his sons were little), and he’s been hooked since. His first cake was for his son Jack’s first birthday—a pink piggy cake.

On Instagram, he shared a picture of him and his sister Josi with the cake, who helped him bake for the first time.

In fact, he said that birthday cake is what propelled his love for baking!

Joshua and Angela Kinsey Tied the Knot in Topanga 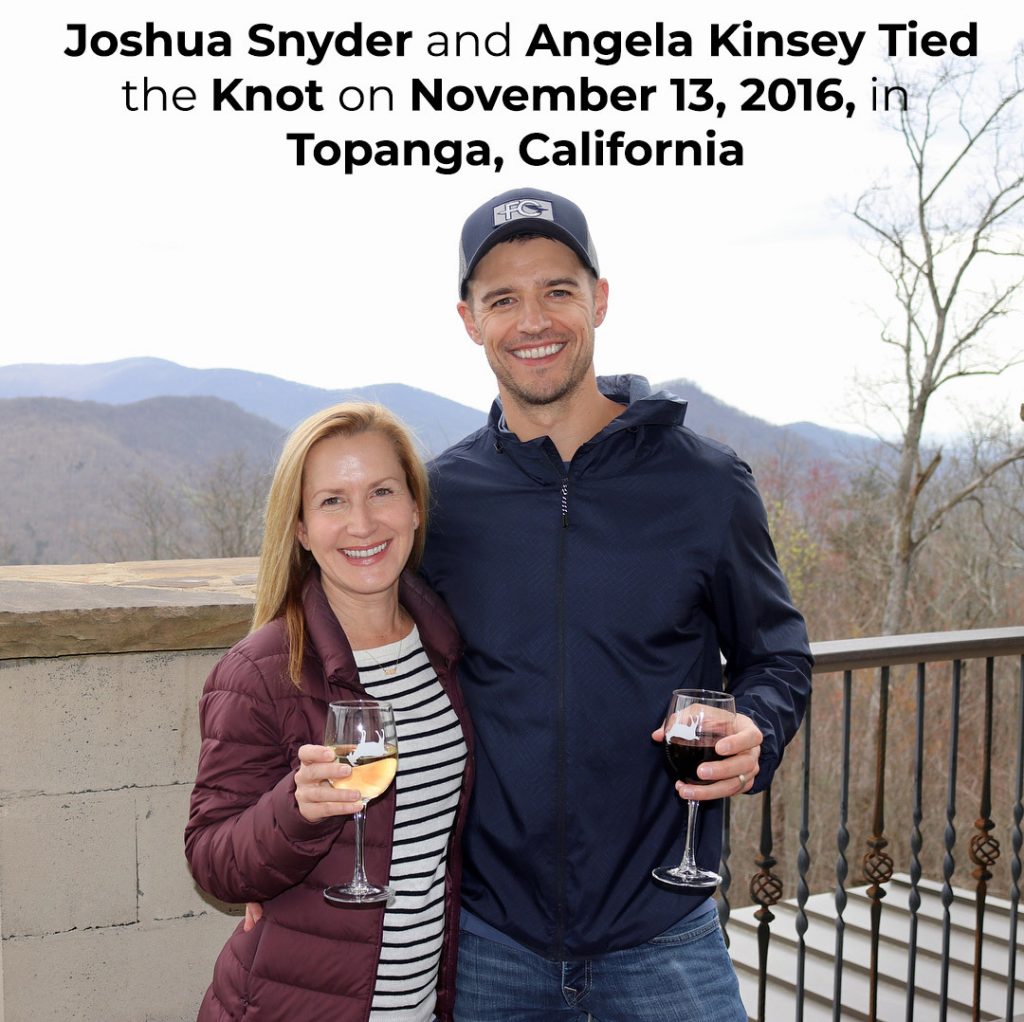 In August 2016, Joshua wanted to propose to Angela against a beautiful background during sunset, but the kids were in a hurry and wanted a hand in the proposal. So, they helped him plan the exact way to do it, which went down in their backyard.

Angela was called to the backyard by her children to see their fort, and by the pool side they had a blanket laid for her to sit.

She was given flowers by the kids, and before she knew it, Joshua came out with the ring in his hand!

Angela’s one of a kind engagement ring (Emerald, set in a gold band), is special to both Joshua and Angela, as Emerald is the birthstone of all three of their children.

“He had called my mom and asked for her blessing…that would have made my Dad so happy. He proposed and I said yes,” she added when recollecting the memory.

And they ended up getting married in the most quaint location—Topanga, California, a wooded area in the Santa Monica mountains.

The couple and their intimate list of 130 guests attended the ethereal ceremony, which was even featured in Martha Stewart Weddings.

The blushing bride wore a J. Crew white Greek-inspired, one-shoulder dress, while the groom strut in style in a navy blue suit and a plaid tie.

Joshua’s cooking skills have definitely sharpened from the “piggy cake” he baked for the first time! Now, he’s a pro in the kitchen, making intricate cookies and gourmet desserts with ease!

From making healthy yogurt dishes and salads to baking scrumptious cookies and cakes, the man has perfected his baking skills!

His techniques and expertise have been showcased by the Food Network too, not to mention a bunch of other online forums like Eating Well, People Food, TasteMade and more.

You can find all his recipe’s on their official YouTube website, as Josh and Ange explain exactly how to bake their recipes and what ingredients to use.

As for a Cookbook? Joshua makes cookies for friends and family and their events, but there is no cookbook in sight as of now. Let’s just hope that Joshua Snyder cookbook is in the works because his recipe’s are to die for! You might want to try the salted caramel brownies…mmm!