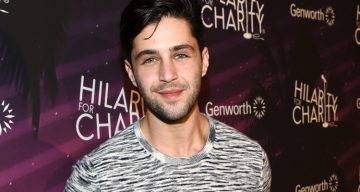 One-half of the stars from Drake & Josh is married! Yeah, you read that right. The young actors from our favorite Nickelodeon show are grown men now! So, who did Josh Pack marry? Keep reading to know more about Josh Peck’s wife.

Over the weekend, actor Josh Peck married his longtime girlfriend, Paige O’Brien, in a beautiful ceremony in Malibu, California. The couple kept the wedding low-key with close friends, family members, and a handful of celebrity guests, including Peck’s Grandfathered co-star, Jason Stamos.

Happy Fathers Day to BOTH my Dads. #loveislove #daddyaf

As we can see from the pictures shared by their friends on social media, the bride looked radiant in a cream-colored strapless gown, with a sweetheart neckline and ivory embroidery, while 30-year-old Peck donned a classic black tuxedo.

Congrats to two of our favorite people. Josh & Paige, we love you ❤️❤️ #couplegoals

Though there were plenty of well-wishers, there was one person who wasn’t quite happy. Josh Peck’s former co-star, Drake Bell was not invited to the wedding! Apparently, things between the co-stars aren’t as good as we thought (or hoped!), and Peck decided not to have his on-screen brother there for his big day! Ouch!

In a couple of now-deleted tweets, 30-year-old Drake Bell has not only let us know that he was not invited, but that he is not happy about it.

“Loyalty is key,” Bell wrote in another deleted tweet seemingly aimed at Josh Peck. “ALWAYS remember where you came from.”

Since seeing the tweets, fans have also taken to Twitter. This time, to express just how sad they are that one of the closest on and off screen friendships they grew up watching has ended.

Here are a Few Things to Know about Paige O’Brien

Not much is know about Josh Peck’s wife, but according to her Facebook page, Paige O’Brien has been dating the actor since November 2013. After dating for almost three years, the couple got engaged in March 2016 before saying their vows in June 2017. O’Brien was also the first between the two to (subtly) announce their engagement through a sweet post on Instagram, where she is flaunting a massive ring.

Once the news was public knowledge, she shared pictures of her engagement party on May 10, 2017.

Thank you to my friends and family for the cutest bridal shower a girl could ask for ?

Josh Peck’s bride is a beautiful lady, and her Instagram proves it. Here are some hot pictures from Paige O’Brien’s Instagram account. Take a look at this natural beauty!

When you find out it's only Wednesday ?

#2. Keeping it light and breezy.

Someone get this girl a Zyrtec ??

#3. She even looks good in windy weather!

#4. All ready to slay at the Britannia Awards.

#5. Winding down on vacation.

Y'all know I love a good robe

Congrats to the newlyweds!