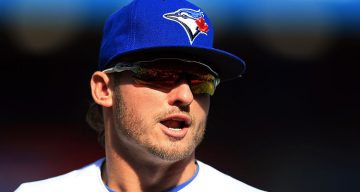 Josh Donaldson is an American professional Major League Baseball (MLB) player for the Toronto Blue Jays, who is most definitely one of their biggest star players this season. Donaldson, known for his quick defensive reflexes, and more notably his killer at-bats, is the third baseman for the Toronto Blue Jays. Long before his career in the major leagues, he played baseball in high school and in college, but has also always been an avid golfer ever since he was a young boy.

Since Donaldson is so successful on the field, people often ask, “What is Josh Donaldson’s net worth?”. It is a modest $12.0 million, but it’s definitely on the rise as Donaldson continues to give outstanding performances on the field. He was voted the American League Most Valuable Player for the 2015 MLB season. He’s certainly made a name for himself this season as one of the Jays’ aces!

Donaldson had a very traumatic childhood because of his father. He was raised by his mother, Lisa French, since his father, Levon Donaldson was in prison for most of his childhood. His father was a construction worker and in 1992, he was sentenced on charges of sexual battery, false imprisonment, and aggravated battery. He was released in 2007. Donaldson was born in Pensacola, Florida and attended high school in Pace, Florida. Since he was constantly bullied by his team mates, his mother transferred him to Faith Academy in Mobile, Alabama. There, Donaldson excelled in football, baseball, and basketball—though he ultimately chose to play baseball.

Donaldson attended Auburn University, where he played baseball as a catcher and third baseman for the Auburn Tigers baseball team. Donaldson’s professional major league career began in 2007, when he was drafted as a catcher by the Chicago Cubs. Donaldson’s career really took off when he joined the Oakland Athletics team in 2010. He became a pinch hitter for the team and started hitting home runs. In 2015, Donaldson was traded to the Toronto Blue Jays with an offer of $4.3 million! On June 1, 2015, Donaldson was named the American League Player of the Week for the second time in his career. He had a spectacular season with the Jays in 2015, and won many Player of the Season awards.

Donaldson is in a great position, even off the field. He could certainly demand some big bucks for the skills he’s proven for his team this season, and last. Earlier this year, the Jays made him an offer he could not refuse. Thanks to this offer, Josh Donaldson’s salary will be $11.65 million for 2016. That salary will increase for the 2017 season as well. Donaldson is worth every penny of what he is being paid. On October 29, 2015, Sporting News announced that Donaldson had won their MLB Player of the Year Award. An even bigger achievement awaited him when on November 19, 2015, Donaldson was named the 2015 American League Most Valuable Player.

When Donaldson is not playing baseball, he can be found playing golf. He has appeared on the Golf channel in 2014 and hit a ball 309 yards in a simulator! He also loves to play the video game, Mortal Kombat. It’s also known that Donaldson loves watching the History channel series, Vikings, and it was announced in January 2016 that he would have a cameo performance in the fourth season of the show! Donaldson is a bit reclusive and does not like to talk about his personal life. Reports say that since May 2013, he has been in a relationship with Jillian Rose, though not many details are known about his mystery woman.

There is more to Donaldson than just big money and awards. He is a very good baseball player, who has the ability to inspire his team mates. Donaldson keeps pushing himself to do better each time he walks out onto that baseball field. Fans adore him and they chant “M-V-P” every time he comes up to bat. With such solid fan support and a drive to constantly prove himself, there is no doubt that Josh Donaldson will continue to thrill his team mates and his fans with his talent.