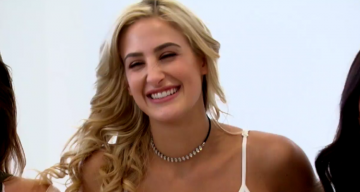 After episode two of The Bachelor season 21, Josephine Tutman was one of the remain 21 contestants. Liz Sandoz was sent home during the latest episode due to Nick Viall’s lack of trust in her motives for being on the show. What else he is supposed to think after she declined to take his phone number the night they hooked up, and then surprised him on the show when it was announced he would be the new Bachelor?  It seems just a little too coincidental…

Josephine Tutman is a registered nurse working in Santa Cruz, CA and has only recently been in the public eye, making her a tough cookie to crack. The show’s previous episodes had characters like Corrine Olympios, Liz Sandoz, and Brittany Farrar dominating screen time with their attention-grabbing actions, and Josephine is one of them. When she first met Nick, she asked him to “Lady and the Tramp it” with her by biting into the end of a hot dog, while she bit the other end. Then, during the January 9th episode during the fake breakup game, she slapped the bachelor across the face! Nick looked shocked and stunned, but laughed it off as the other contestants’ jaws dropped and audiences cringed. To learn more facts about the contestant and to find out what is known about Josephine from The Bachelor’s family, keep on reading.

Considering she has only been in the public eye for a short while, there is not a lot of information on her family, but the contestant is very public about her career and modeling projects. Josephine’s online photography portfolio contains images of her modeling credentials from 2014 to 2016. The 5’7” beauty has modeled for Charmosa swimwear and Kata Marie Designs. She has been the cover model for magazines like the 7Hues 2016 Swim issue, Pump, and Promo. Looks like she has a bright future both in the modeling world and the medical field!

Josephine from The Bachelor’s Siblings

On Josephine’s ABC profile, when asked who she admired the most in the world, “My brother. Hands down. He has been my greatest inspiration, best friend and biggest motivator in life.” Josephine from The Bachelor’s brother, Avi, is a student at Yale University and she recently took to social media to share her support for his efforts there. How many sisters/brothers does Josephine from The Bachelor have? From what we can tell from social media, she just has the one brother.

Her Jewish culture plays a big part of her life, but she is “open to all religions.” In her profile, she said she loves God and considers herself to be a spiritual person.