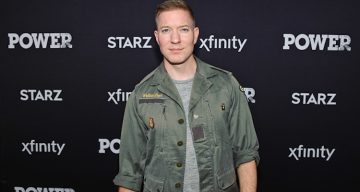 Who is Joseph Sikora married to? If you’ve been watching this season of Power, then chances are you’ve asked this question. As Power’s popularity increases (especially with the start of a brand new season now airing), many are becoming more curious about the man who plays Tommy Egan. If you want to learn more about Joseph Sikora’s personal life, then keep reading to find out!

Let’s get right to it, shall we? For starters, the slot for Joseph Sikora’s wife is still open! That’s right ladies, there’s still hope! And since Joseph Sikora’s dating timeline is under wraps, we’re going to focus more on the actor and his latest love connection on Power.

Who is Joseph Sikora?

Joseph Sikora (pronounced shi-cora) is Polish-American actor who was born on June 27, 1976 in Chicago, Illinois. He grew up on the Northwest side of the city and attended Columbia College. Although he’s been acting since the late ’80s, he’s best known for his role as the hot head drug dealer, Tommy Egan on the hit Starz series, Power.

He Sold Drugs in the Past

That’s right, like his character, Sikora used to sell drugs on the street when he was younger! Last year on The Wendy Williams Show, he admitted that he had a little more in common with his character than people previously knew.

“Let’s be real. I think we all do regretful things when we’re younger, and we grow up and we advance. You know a little, a little mischief here…”

“Have you ever sold drugs in real life?” Williams asked Sikora again.

“I guess the truth answer would have to be yes, but how much, I’ll take a little bite of a lemon,” Sikora said.

He was a Boxer, Too!

We’re starting to see why Sikora got the job as Tommy—the role was practically written for him! Like Tommy, Sikora boxes and was an amateur fighter back in the day.

“I was an amateur fighter for a lot of years, [a] boxer, in Chicago as well,” Sikora said to Williams. “And then when you’re not boxing, I think that you’re probably taking [anger] out in different ways. So really to learn how to manage the anger. And I think it really helped for Tommy because then you actually end up owning the anger.”

As we all know by now, Tommy and LaKeisha are kind of an item and by the second episode of Season 4, the two had already had sex! Both characters didn’t have the best luck in the past: Tommy killed his pregnant girlfriend Holly and Kanan killed his son Sean, LaKeisha’s (and Tasha’s) love interest. But in real life, Sikora and Anthony are just good friends, who occasionally only “appear” to be having sex.

“I think that we have a mutual admiration for each other,” Sikora said to Page Six. “We built up a friendly relationship, so then you are put into a mock sexual relationship. Obviously, no private parts are being put near each other. But we really are kissing and touching so it is a luxury to do it with somebody you like and respect.”

“However, it is far more sterile than people give it credit for. But as long as it does not look that way, I am fine.”