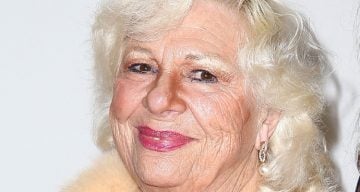 Yesterday was a sad day in Hollywood, as Joseph Bologna passed away. He was a tremendous actor and writer who usually co-wrote plays and films with his beloved wife, Renée Taylor. She is an incredible actor herself, and many said they were the funniest couple around. Read on to know more about Joe Bologna’s wife right here.

Renée Taylor said that Joe Bologna had “a beautiful life and a beautiful death” after his passing on August 13, 2017. Bologna is survived by his wife and children, Gabriel, and Zizi. The entire family have worked in films, but back in the day, Taylor and Bologna were the  epitome of rom-com plays and movies, as they wrote and appeared in most of their own work. Here’s everything you need to know about Joe Bologna’s wife, Renée Taylor.

#1. Renée Taylor was the Famous Act of an NYC Club

Renée Wexler was born on March 19, 1933 in Bronx, New York City, making her age 84, two years older than Joe Bologna. She was always interested in films and the limelight, or so it seemed when she started her career as a comedian in a nightclub called Bon Soir in New York. It was the early ’60s and people were starting to look beyond the lines of theater and movies for entertainment. Barbra Streisand, who was unknown at the time, would open Taylor’s shows.

During the mid-1960s, Joe Bologna and Renee Taylor met after being introduced by Buddy Allen, who represented both actors. During an interview, Taylor said that well into their 47th year of marriage, they had a huge fight due to which she asked Bologna to “get out,” and he started packing. She started to pack too, and when he asked why, she said, “If you ever leave me…I’m going with you.” Their strong bond had their ups and downs, and it was what made them stay together for 52 years.

#3. You Know Renée Taylor from The Nanny

The Nanny was a hit TV show featuring Fran Drescher, and had Renée Taylor as her loud, sweet, and funny mother, who was loved by viewers. She had many other roles in movies like Lovers and other Strangers, Made for Each Other, and It Had to be You, but none come close to how many people recognized and loved her as Sylivia Fine from The Nanny. She also made guest appearances on How I Met Your Mother as Ted Mosby’s neighbor, Mrs. Matsen.

#4. Renée Had an Amazing Family with Joe Bologna

Renée Taylor has two children, Gabriel and Zizi, with Joe Bologna. Gabriel followed in the footsteps of his parents with appearances both on and off camera, and Zizi prefers to be behind the scenes in the music department for films. The couple has had a wonderful life, and it looks like Joe Bologna died with the love and support of his family. His funeral will be in Beverly Hills at the Church of the Good Shepherd.

Taylor was in the industry for five decades now, and was known for her comic timing —something she carried on throughout her career, even today. Her net worth is an estimated $3.0 million and her yearly income is around $352,541. Through endorsements, she earns an approximate $78, 431.